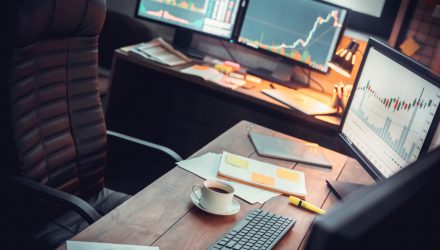 A coffee-related exchange traded note has been surging, with coffee prices touching a six-year high, as Brazil’s main growing region suffers through its worst frost damage in over 25 years.

The iPath Series B Bloomberg Coffee Subindex Total Return ETN (NYSEArca: JO) jumped 33.0% over the past week and was now up 56.4% year-to-date. Meanwhile, ICE Coffee “C” futures up to $2.1520 per pound, its highest since October 2014.

In recent months, a cold snap was the second weather shock to coffee crops in Brazil, the world’s biggest coffee producer, pushing up prices around the world, the Wall Street Journal reports. Coffee farmers were already under pressure after a drought originally damaged 2021 crops.

Widespread frosts hit Brazil last week and appeared to have decimated next year’s Brazilian coffee crop. Farmers and traders had been relying on the 2022 harvest to help recover the low stockpiles after the drought caused a significantly smaller crop this year.

José Marcos Magalhães, president of the Minasul coffee cooperative and also a grower, explained that he previously expected to lose two-thirds of the 2022 harvest. “I normally produce 12,000 bags, and now I think I’ll lose about 8,000,” he told the WSJ.

Coffee trees are sensitive to frost, which can cause severe damage and even kill trees completely, Reuters reports. If trees are replated, production would be stunted for around three years.

“This marks the first time since 1994 that the country has experienced such a weather event,” coffee trader I & M Smith said in a market update, referring to the previous July 20 harsh frosts in that year.

Preliminary estimates from the Brazilian government’s food supply agency Conab calculated that last week’s frosts affected 150,000 to 200,000 hectares of coffee plants or about 11% of the country’s total arabica crop size.

“The extent of the damage is still unclear. However, estimates are now between 5.5 million and 9 million (60 kg) bags, up from 2 million to 3 million last week,” Charles Sargeant, softs and agricultural commodity broker at Britannia Global Markets, told Reuters.