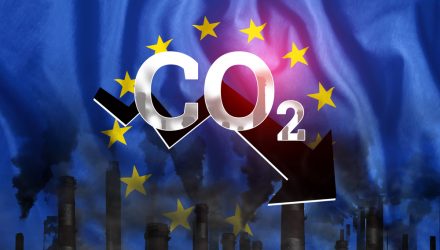 It’s partway into January, and much of Europe looks like it will escape the dangers of a harsh winter that would have eaten into fuel reserves the EU has been stockpiling since last summer in the wake of Russia’s cessation of natural gas to much of Europe. Ahead of the flurry of market activity that is likely to pick up towards the end of the first quarter, Luke Oliver, managing director, head of climate investments, and head of strategy at KraneShares, took a realistic look at what’s in store for the EU carbon market this year.

It’s a busy time of year for the European carbon allowances market as participants tally up their emissions for the previous year and buy any necessary additional allowances to cover actual emissions, driving up trading volume and activity in the first quarter. Emissions for last year are expected to be lower in an unusual turn of events, largely because of looming recession and skyrocketing natural gas costs for industries. That said, emissions for the electricity sector are anticipated to have grown from the increased use of coal as a power source.

“This fuel-switching trend may offer some support to the market as traders look ahead to 2023. There’s likely to be little change in the power plant operating merit order in the short term since, while gas prices have fallen sharply from their 2022 highs, they are still not low enough to be competitive as a fuel for generation,” Oliver explained on the Climate Market Now blog.

Oliver went on to outline the major factors that will likely impact the EUA this year in a largely bullish outlook. High points include the potential for increased demand this year as new participants and traders enter the market and build their positions for 2023 and the resolution at the end of last year of the “Fit for 55” reforms that will bring changes and tightening to the EU Emissions Trading System (EU ETS) in the coming years.

Another bullish case for EUAs in 2023 includes the emissions report for last year: “A number of analysts have suggested that the 2022 certified emissions data will show an overall increase in verified emissions for 2022, compared to 2021’s 1.307 billion tonnes,” Oliver wrote. EUA supply last year was 1.011 billion tons, which would mean a sizeable reduction in the current oversupply.

The EU has agreed to bring an extra €20 billion ($21.58 billion USD) of allowances to market in the next three years, which could equate to another 250 million EUAs of supply in a bearish outlook for the market in the shorter term.

“Added to this is the overall uncertain macroeconomic outlook, which will hang over the market and may dissuade speculative traders from taking bullish positions,” Oliver explained.

That said, the EUAs being brought forward under the REPowerEU agenda are being pulled from the 2027–2030 auction, equating to tighter supply in the medium term.

“The market will probably mark time until the European Commission publishes more details of the timing and size of the REPowerEU auctions, likely by the end of Q1 after the legislation has been signed off by EU member states and become law,” wrote Oliver.

Investing in the EU Carbon Market

January is off to a weaker note on falling gas and power prices in Europe, but the increasing reliance on coal as the preferred power source is likely to drive EUA demand. There is strong opportunity now for investors looking to get into the market before the number of bullish potentials begin to engage this year.

The KraneShares European Carbon Allowance ETF (KEUA) offers targeted exposure to the EU carbon allowances market and is actively managed. The fund’s benchmark is the IHS Markit Carbon EUA Index, an index that tracks the most-traded EUA futures contracts, a market that is the oldest and most liquid for carbon allowances. The market currently offers coverage for roughly 40% of all emissions from the EU, including 27 member states and Norway, Iceland, and Liechtenstein.