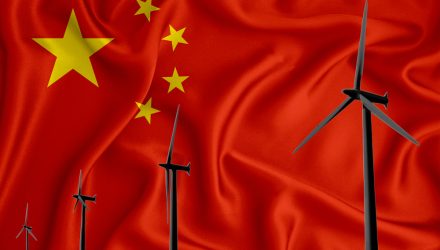 Experienced clean technology and renewable energy investors know that China is one of the world’s worst polluters, and as a result, it also has one of the most ambitious agendas when comes to the adoption of solar and wind power and other green energy sources.

Given the size of China as measured by economy, population, and square miles, the scale at which the country needs to embrace clean technology and green energy is simply massive and is likely to require trillions of dollars of spending in the coming decades. That’s potentially good news for exchange traded funds such as the KraneShares MSCI China Clean Technology Index ETF (KGRN).

KGRN, which turned five years old in October, is home to companies engaged in a variety of clean energy and technology pursuits, confirming it has the breadth necessary to capitalize on China’s rapid, massive embrace of clean technology.

“China is on track to meet its 33% electricity consumption target from renewables by 2025 and could comfortably exceed it amid ongoing efforts to debottleneck the power grid to accommodate more renewables, analysts and clean energy project developers said,” noted S&P Global Commodity Insights.

That’s impressive because it implies that the country is already close to reaching its previously stated five-year goals for boosting renewables as a percentage of overall energy consumption. That’s relevant to investors considering KGRN because the ETF’s member firms are companies involved in alternative energy, pollution reduction, and water sustainability, among other pursuits.

Under the five-year plan, “one of the priorities is to enhance and expand the current ultra-high voltage power transmission networks, addressing the disparity of renewable resources in different provinces across the nation that also causes huge differences in renewable energy consumption,” added S&P Global.

Of interest to investors considering KGRN is that Beijing isn’t enforcing its five-year plan clean energy goals in uniform fashion, meaning there are provincial targets that need to be met, and those goals vary from region to region.

Arguably, that’s a positive for KGRN because it doesn’t put the ETF’s holdings in a position where they might fall short of government targets. Bottom line: Beijing’s renewable energy ambitions won’t be cheap, and that could be a long-term catalyst for KGRN,

“The numbers indicate that besides pursuing generation capacity expansions, the government’s focus must now shift to improving connectivity of renewables to the grid and delivery to the end-user. Experts have noted that changes will also be needed in China’s power trading and dispatch that has a top-down approach and is mainly conducted within individual provinces, which makes it difficult to resolve supply-demand imbalances across the nation,” concluded S&P Global.