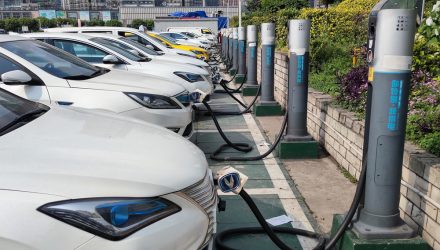 An Inside Look at the Electric Vehicle Transformation in China

China remains a global leader in electric vehicle manufacturing and adoption, with a burgeoning market and constant consumer demand backed by regulatory support. One company that has been instrumental in encouraging and helping to bring about the transition is China’s State Power Investment Corporation. Xiabing Su, a cultural analyst at KraneShares, and Anthony Sassine, CFA and senior investment strategist at KraneShares had the chance to interview Yolanda Zhang, general manager at State Power Investment Corporation Yuetong Qiyuan New Energy Technology, company and regional development director for China State Power International Development Limited, to discuss the transition and EV environment in China.

State Power is an electric utility company, but it’s also so much more. The company has a presence in the finance, logistics, information technology, and environmental protection industries, giving it an unprecedented vantage point in the energy transition in China. The world’s first battery swap for heavy trucks was made by a team that Zhang led previously and she is one of the first people responsible for creating battery swapping stations for commercial use.

State Power is one of the five largest power generation groups in China and contributes the most of any of the major power generating companies to the development of renewable energies.

“Among the five major power groups, the proportion of investment of SPIC in the development of new energy is the largest, with photovoltaics ranking first in the world and wind power ranking second in the world,” Zhang explained.

State Power is the first company of the central State-owned power companies to commit to China’s carbon neutral path of peak emissions by 2030 and zero net emissions by 2060.

“In the process of reducing carbon emissions, we noticed that the transportation field often misses a great deal of carbon in China so we hope to replace it with electricity in the field of transportation,” Zhang said.

To accomplish those goals, State Power has joined with a range of strategic partners to tackle emissions in a range of industries including mining, ports, steel plants, and electric vehicles, with a focus on expanding the charging infrastructure necessary for electric vehicles.

“We also need to promote dispatching systems, including driverless intelligently managed vehicles, letting our new energy vehicles in the application process be more intelligent, technological, and more secure than traditional vehicles, and to reduce the cost of the use and transport process truly,” Zhang discussed.

Regulatory support for electric vehicles in China over the last decade has helped to grow the industry, with support through large subsidies as well as policy guidance. Such growth can be seen through the increase of heavy electric trucks in the last two years. In 2020 there were slightly more than 1,000 units in China, but by the end of 2021, there were over 10,000.

“This is the result of policy guidance, and people advocating such replacements, especially for steel mills and mines, which are themselves high-emissions and high-pollution scenarios,” explained Zhang.

Over time, State Power anticipates that policy guidance will cease to be a driver for the EV space, with consumers instead increasingly demanding electric vehicles over traditional internal combustion engine cars.

Zhang went on to discuss some of the green initiatives and green energy projects that State Power is currently working on, as well as the differences between swapping stations versus fast charging stations for electric vehicles, and EV companies in China.

KARS invests in many familiar car companies such as GM, Tesla, Ford, Mercedes-Benz, BMW, and major Chinese EV manufacturers such as Li Auto, Nio, and BYD, some of the biggest companies in the global electric vehicle industry.