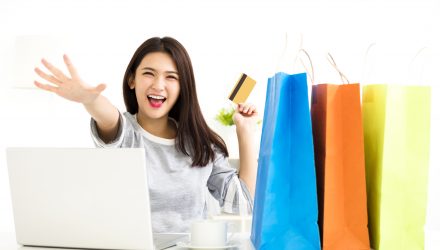 The emerging market internet segment has also capitalized on the renewed focus on growth-oriented stocks earlier this year, along with the search for greater value in international markets, such as developing world equities, which are more attractively valued than their U.S. counterparts.

“BABA’s Singles Day numbers were good. They brought in $25.3 billion, up from $17.8 billion, 39% YoY vs. ~25% growth last year,” said EMQQ’s Kevin Carter. “BABA’s quarterly revenue growth in more recent quarter was 61%, so Singles Day growth has not kept pace with annual growth, as was the case last year as well, meaning perhaps Singles Day is more saturated than overall ecommerce, but either way, 39% growth or 61% growth are both great numbers.”

Alibaba is EMQQ’s largest holding, accounting for nearly 10% of the ETF’s weight, according to issuer data. However, EMQQ and Singles Day are about more than Alibaba.

“Importantly, this is not just a BABA story. JD.com saw $19.1 billion in their own Singles Day sales, representing 50% growth from last year (though they started their event on 11/1 and ran it through 11/11 to ease delivery bottlenecks),” said Carter. “Some interesting items sold by JD.com during this period: 500,000 Thailand Black Tiger shrimp; 55 million facial masks; $75 million in air conditioners in one 30 minute span; and $15 million in TV sets in 1 minute.”