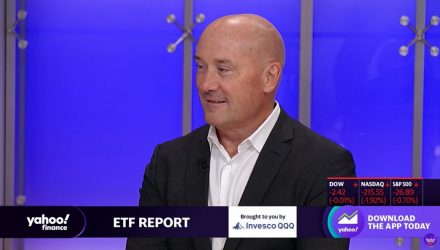 VettaFi vice chairman Tom Lydon appeared on Yahoo!Finance to discuss tech’s slide and the state of the markets.

“For the first time in 20 years, we’re seeing active managers actually outperform some of their counterparts that they benchmark against,” @Vetta_Fi Vice Chairman @TomLydon says. “That’s good for the ETF business.” pic.twitter.com/y2WFhvFLdV

“Coming out of the financial crisis it was all about those FAANG stocks,” Lydon said. He continued, “in the last couple of years S&P’s been challenged and we’re seeing more of that with these mega-cap stocks being challenged in the market.” Tech’s slide has weighed on the market, but Lydon sees a silver lining for ETF investors, particularly active managers, who are finally outperforming some of their counterparts.

Lydon also mentioned opportunity in small caps, which are up almost 8% over the last eight months, compared to the broader S&P performance of 3%. “Diversifying away from these big companies is import,” Lydon said, noting that domestic small caps are enjoying some of the benefits of the strong dollar, which allows them to more readily afford services overseas while doing most of their business in the United States.

Asked about Xi’s third term and its impacts on China, Lydon said that Chinese tech companies like Alibaba (BABA) are well-positioned to take full advantage of emerging growth. With many Chinese citizens just starting to fold laptops into their lives and record valuations, ETFs like the KraneShares CSI China Internet ETF (KWEB) could benefit greatly, according to Lydon.

Though the dollar has taken a step back today, it remains incredibly strong. “Right now with all the uncertainty in the marketplace, people are going towards safe havens, the dollar is a safe haven for sure,” Lydon said. He pointed to the Invesco DB US Dollar Index Bullish Fund (UUP) as a way for investors to play the dollar’s continued strength.

Lydon also observed that “the Fed’s been pretty clear about signaling – which is a good thing.” More clarity from the Fed on rates has allowed for a more confident market, with the additional clarity allowing investors to return to the bond market, according to Lydon. “What we can’t count on is stability overseas, and that’s the scary thing,” he said, noting UUP can hedge against problems overseas.