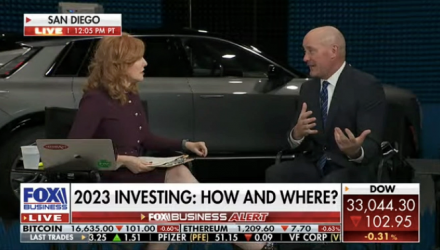 Despite the rough markets last year and the general skittishness around China, Lydon thinks there are some great valuations to be found. “You look at the experts on Wall Street – they haven’t seen valuations this low in over twenty years.”

Claman expressed surprise that China could be having a booming real estate market right now, but Lydon noted that China isn’t seeing rising rates the same way as the U.S. “The other thing is the banking sector in China has been helpful to the economy,” he noted.

Though there are some lingering issues with having China stocks listed on U.S. exchanges, Lydon believes that there is time for the two countries to sort it out. By the time it gets sorted out, markets are likely to move, meaning that these valuations are a generational opportunity that is unlikely to come about again for a long time. ETFs like the KraneShares CSI China Internet ETF (KWEB) could be interesting pickups right now.

Asked what his early stock moves are, Masters, who shorted the Nasdaq 100 last year, pointed to two of his early 2023 buys as being the Direxion Daily Gold Miners Index Bill 3x (NUGT) and the ProShares UltraShort Real Estate ETF (SRS).

Lots of investors are wondering when (and if) the Fed will pause or pivot in the coming year. Lydon concurred with Masters that, “we’re still in inflationary times.” The Fed has indicated that they have no plans to pause or pivot in 2023, which does make gold an interesting opportunity, given its history as a second-half player during periods of inflation.

Lydon cautioned investors to stay away from long-duration bonds for at least the next six months, given the Fed’s current stance. “I think by the summer we’re going to see a little relief.”