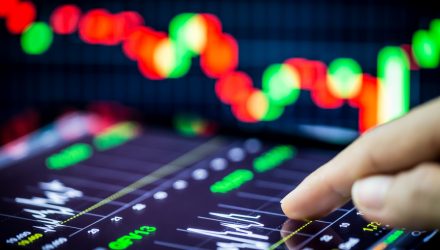 The Case for Higher Dividend Investing Opportunities With KVLE

The last two years have been times of remarkable market performance despite pandemic hardships driven by a handful of high-growth companies and tilted heavily to the information technology sector. Concerns of valuations became much more prominent, however, as inflation soared and market performance became more volatile, and this is expected to continue in the near-term.

It’s a concern that has investors looking for investment opportunities elsewhere, and the KFA Value Line Dynamic Core Equity Index ETF (KVLE) could be a more conservative equity investment solution. A recent white paper from KFA Funds, a KraneShares company, discussed the factors that contributed to the current market environment as well as a diversified approach to investing through exposure to higher dividend stocks.

The Factors That Led to Current Markets

Over the span of three years, the S&P 500 doubled, growing 100.37%, 52.39% of that in the last two years alone. It’s been meteoric performance despite a worldwide pandemic and subsequent recession, and this performance has been largely driven by the top five companies in the index.

The concentration is not uncommon historically but has become much more condensed in recent years. What’s more, whereas the top five companies used to encompass a variety of industries and investing in them brought diversification inherently, now the top five companies all fall within the tech sector and investing heavily into them brings greater risk as market volatility continues.

The last time there was a similar environment was during the dot-com bubble in 2000 when a concentration of tech companies within the top five performing securities of the S&P 500 made up 17.83% of the index at the height of the bubble. Investors slowly lost interest and reconsidered the worth of such high-priced companies, bringing valuations back down once more.

The Role of Dividends in Performance

KFA analyzed the total return of S&P 500 constituents over a 22-year period from December, 1999, to December, 2021, and subdivided the companies into five capitalization-weighted segments that included a segment of stocks that didn’t pay dividends and then four segments that paid dividends grouped from lowest to highest. 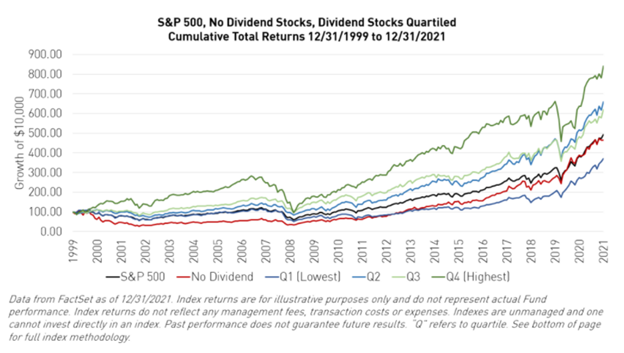 Comparing these to the performance of the S&P 500, they found that the companies with no dividends ended last year at roughly the same growth as the S&P 500 itself, although with more volatility. Companies with the lowest dividend payments actually ended up underperforming the S&P overall and were vastly outclassed by any other dividend-paying segment.

Unsurprisingly, companies that paid the highest dividends also had the highest total returns but were also the most volatile of any of the segments and both less diversified and riskier than the S&P 500.

Some advisors and investors take the stance that dividend yield doesn’t affect total returns, but KFA believes that the qualities that make higher dividend yielding securities more appealing are the signal of strength they send in leadership and the company itself. A company whose board of directors set higher dividend goals is conveying that it is profitable and looks to remain so, and shows that it takes shareholder interest seriously while running efficiently, and also that it believes that valuations should be higher.

The KFA Value Line Dynamic Core Equity Index ETF (KVLE) follows a strategy of investing in higher-yield companies while diversifying in a way that a “theme” portfolio does not. The fund is a core equity portfolio of securities that are tilted to favor dividend yield, and it seeks to increase yield while avoiding investing solely in high-yield sectors and stocks.

KVLE is benchmarked to the 3D/L Value Line Dynamic Core Equity Index and utilizes optimization technology to emphasize securities with solid dividend yields that have both the highest Value Line Safety and Timeliness rankings. The fund uses a smart beta strategy in seeking more cost-efficient alpha as well as a risk-management strategy that seeks to limit the effects of major market declines while also being positioned to capture positive returns.