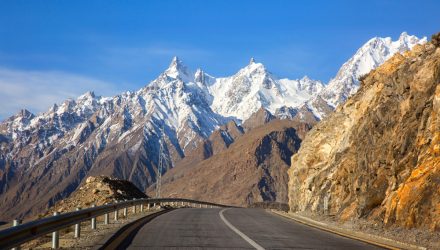 China’s ambitious infrastructure plan can be packaged in ETF form with the KraneShares MSCI One Belt One Road Index ETF (OBOR).

“China’s Belt and Road Initiative (BRI), sometimes referred to as the New Silk Road, is one of the most ambitious infrastructure projects ever conceived,” a Council on Foreign Relations article explained. “Launched in 2013 by President Xi Jinping, the vast collection of development and investment initiatives would stretch from East Asia to Europe, significantly expanding China’s economic and political influence.”

As China works to bring this vision into reality, the individual companies on the forefront of the infrastructure plan could stand to benefit. The fund is already up 11% in 2021.

The underlying index is designed to track the equity market performance of listed companies with high revenue exposure to Chinese infrastructure development in a specified set of industries relevant to the Chinese government’s “One Belt, One Road” initiative, as determined by the provider of the underlying index.

Key highlights of the fund, as outlined on the KraneShares website:

China Looks to Expand Its Reach

As China works to become more economically independent, the infrastructure plan can only help its cause. The OBOR initiative could become a gateway for more political and economic influence.

“China has both geopolitical and economic motivations behind the initiative,” the article added further. “Xi has promoted a vision of a more assertive China, while slowing growth and rocky trade relations with the United States have pressured the country’s leadership to open new markets for its goods.”