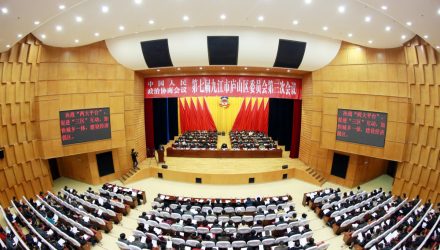 China is in the midst of its week-long Party Congress, which was started Sunday with President Xi’s two-hour speech, it hasn’t been the market-moving event some investors were hoping for, but there are signs it could have implications for select sectors and industries. Count healthcare among that group, indicating the KraneShares MSCI All China Health Care Index ETF (KURE) could be a China ETF to watch over the near term.

That could be good for a near-term for KURE, but China’s sprawling healthcare market – the world’s second-largest behind the U.S. – is a long-term investment thesis, indicating KURE could be a relevant consideration for patient, risk-tolerant investors.

As a China healthcare ETF, KURE shares some similarities with US-focused equivalents, including attractive valuations and the potential to be an epicenter of mergers and acquisitions activity.

“The global healthcare sector has experienced an investment boom by venture funds and private equity players over the last few years, lifted by growth prospects during the pandemic,” reports Reuters. “China’s massive health sector, comprising pharmaceuticals and fast-growing tech and biotech firms, has also been underpinned by rising public and private spending.”

As of the end of the third quarter, mergers and acquisitions activity in China’s healthcare totaled $16 billion on a year-to-date basis, or barely more than half of the 2021 total. That’s likely the result of a slack global economy, but if China’s economy perks up next year and the Peoples Bank of China (PBOC) helps with easy monetary policy, consolidation could increase, potentially benefiting KURE along the way.

Additionally, KURE could benefit from Beijing’s commitment to the zero-COVID policy, which was reiterated by President Xi on Sunday. While many in the west are critical of that policy, it is the lay of the land in China and could have significant implications for healthcare stocks, including some KURE member firms.

“China’s national medical insurance system has contributed to the major strategic achievements in the fight against COVID-19 with an accumulated appropriation of 20 billion yuan ($2.79 billion) of special funds having been earmarked and 2.97 billion yuan of payment having been settled as of April, statistics from China’s National Healthcare Security Administration show,” according to The Global Times.