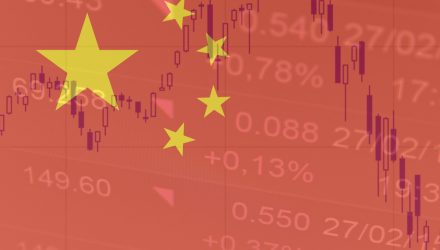 China is one of the few countries globally that is practicing a monetary easing policy while much of the world tightens in a fight against inflation. It has opened the window for investment opportunities within China that advisors might currently be overlooking, particularly within bonds.

Foreign investment into China dropped significantly last year as the world’s second-largest economy by nominal GDP embarked on sweeping reforms and regulations that spanned sectors, with a large focus on the technology sector. The tech sector in China, as in the U.S., is home to some of the largest and growthiest companies, but a constant hammering of reforms from the Chinese government beginning last summer caused the regulatory risk to rise exponentially for the sector and pushed a portion of foreign investors to the sidelines.

That regulatory risk is believed to be at an end, Ahern believes, and the government has shifted into a policy of monetary easing and support while the government combats a slowing economy. The perception of risk, however, coupled with geopolitical events surrounding Russia, has led to a schism in how the Western world views China versus the perception within its borders.

Ahern explained that there is “this disparity between what foreigners think about China and what do people in China think about China, and the Chinese historically are far less pessimistic. And it’s not that they don’t have access to Western media, which is this kind of constant negative media barrage; it’s more, they just don’t buy into it, that they would say that things that really matter are government policy.”

The collapse of real estate development giant Evergrande last year continues to have ripple effects on China’s real estate sector and has prompted targeted support from the government to ensure that partially completed building projects abandoned for months will be completed. Real estate support from China’s central banks is part of the larger economic support that is happening across the economy as the government looks to add stimulus to an economy still battling COVID impacts.

“China’s in an easing cycle. They cut the loan prime rate. They’ve cut the intra-bank lending rate. They’re easing because they recognize that the economy needs support, and that’s a great tailwind for investors,” Ahern explained.

“Also, for investors in China, as interest rates drop, the greatest bull market in government treasuries globally right now is in China,” Ahern said. “Chinese treasuries have rallied pretty significantly as they ease.”

The KraneShares Bloomberg China Bond Inclusion Index ETF (KBND) invests in treasuries and high-quality corporate bonds within China which could be an area with attractive yields compared to much of the world. The fund seeks to track the Bloomberg China Inclusion Focused Bond Index and offers monthly distributions.

The index is weighted at rebalances so that renminbi bonds issued by the People’s Republic of China constitute make up 25% of the weighting, renminbi bonds from policy banks make up another 25%, and renminbi bonds from corporations and other government entities make up the remaining 50%. Individual issuers are capped at a 9% representation and all corporate bonds must have a rating by Fitch, Moody’s, or Standard and Poor’s of BBB-, Baa3, or BBB-, or higher.