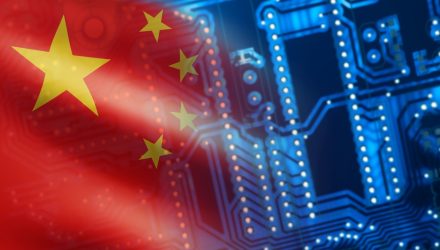 ETFs tracking Chinese technology and consumer discretionary firms have had a relatively strong month, producing a near-mirror image of those sectors being slammed by inflation and rate hikes in the U.S.

Seven of the top ten-gaining ETFs over the past month follow Chinese equities, according to data from ETF Logic. 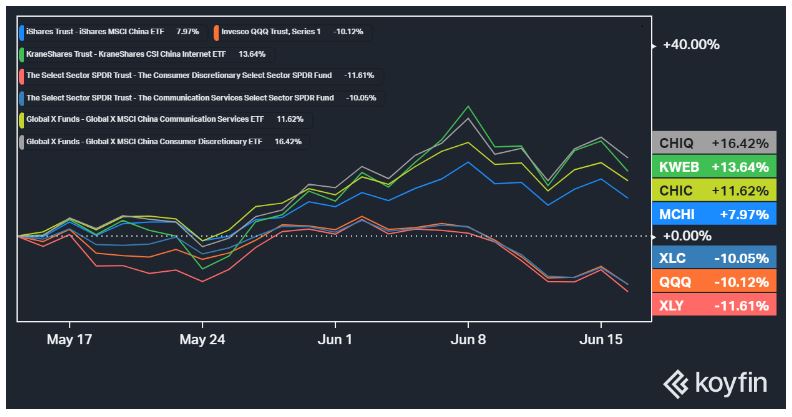 The industry-specific China funds are also beating the total-market benchmark, iShares MSCI China ETF (MCHI), over the past month.

Chinese leaders have rattled global supply chains for the past several months with their commitment to a “zero-COVID” policy. Authorities have closed down ports, put swaths of major cities like Beijing and Shanghai on lockdown, and enforced mass testing on a stop-start basis whenever even a handful of positive cases are detected.

The Chinese tech sector took its initial plunge last summer when Beijing launched an investigation against ride-hailing app DiDi shortly after listing on the New York Stock Exchange. Regulators later added video games, private tutoring, and other industries in their broad inquiry into broad swaths of the Chinese economy.

That led to a crash in previously high-flying Chinese stocks despite the promise of the country’s middle class growing to fruition. The KraneShares CSI China Internet ETF (KWEB) ended 2021 with a 49% loss, although contrarian-minded investors added a net $7.3 billion in flows during the same period.

Chinese officials are seemingly backing off as of late. Liu He, a top economic official within China’s ruling party, said the country would offer its support to the “platform economy,” a phrase interpreted to mean internet giants like Alibaba, JD.com, and others that offer e-commerce and internet content.

Reuters also reported Friday that Chinese regulators had approved Ant Group’s application to open a financial holding company, a technical step that could signal another go at an initial public offering after the firm halted its debut last November. The IPO was valued at the time at $37 billion, easily the largest global debut in history.

Sentiment on the space seems to be centered around the combination of Chinese regulators pulling back on technology firms that tend to cross over into e-commerce, with hopes that COVID restrictions will loosen.

China may also seek to generate more of its growth domestically as the U.S. and other Western countries enter a monetary tightening cycle in theory designed to reduce demand and inflation.

KraneShares Chief Investment Office Brendan Ahern pointed to slowing growth in Chinese manufacturing data as an indicator of a shift to domestic spending, which would support the recent outperformance of consumer discretionary funds.

“For China, what’s going to offset the weakness in (export) manufacturing? It’s got to be domestic consumption,” he said.

That explains the relative outperformance of PGJ, CHIQ, and KWEB. Those three ETFs’ holdings are all weighted at approximately 80% to stocks in the technology services, retail trade, consumer durables, and consumer services sectors. CHIQ holds a 76% allocation to technology services stock but lacks significant exposure to retail companies.

The fate of China-focused funds focused on technology and consumer spending for the near future is likely tied to whether talk of regulators loosening their grip on Chinese megafirms and using lockdowns to stamp out COVID pans out. Ant Group and China’s financial regulator have not formally announced approvals that would open the door for the company to go public, and the two denied plans for an IPO earlier this month before the Reuters report.