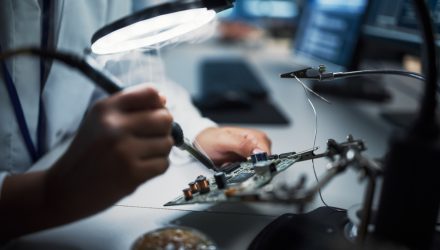 The semiconductor chip shortage has been the story that just keeps on going, as industries continue struggling with serious supply shortages exacerbated by the pandemic and supply chain issues. Chip manufacturers globally are stepping up big and ramping up investments into their research and development facilities to help combat the supply shortage long-term and help meet future demand, reports CNBC.

“We see capital [expenditure] nearly doubling over the 2021-2025 5 year period vs. 2016-2020 period,” Peter Hanbury, a semiconductor analyst at research firm Bain, told CNBC. “This increase is due to both the increasing complexity of new leading-edge technologies which have more process steps to create a wafer and require more expensive tools, as well as a response to the chip shortage with manufacturers increasing capacity across many technologies.”

Semiconductor chips are necessary for many aspects of modern living, from washing machines to cars, and as societies increasingly rely on technology, the demand is only expected to increase globally over time.

“The human race is addicted to technology,” said Glenn O’Donnell, research director at analyst firm Forrester. “Demand will continue to increase, not wane. In fact, I am skeptical that all this investment is actually enough.”

Investing in Semiconductor and 5G Growth in China

China is one of the world leaders in 5G technology adoption as well as spending, and it is working rapidly to become self-sufficient with semiconductor production, with goals of 70% domestic use by 2025. The KraneShares CICC China 5G and Semiconductor ETF (KFVG) offers exposures to these rapidly expanding industries within China.

The top 30 securities have a cap of 10% of the fund, and KFVG minimizes turnover by not adding a company until it is ranked 25 or higher by Fuzzy Logic, doing business as FastINDX (the index provider), and a company will not be removed until it is below 35th.