You are at:Home»China Insights Channel»Another Round of Regulatory Action Sends China ETFs Reeling 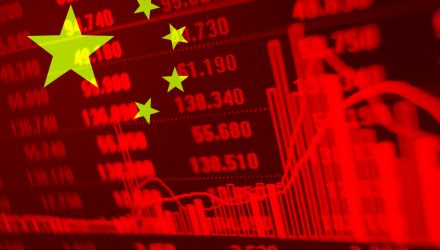 Another Round of Regulatory Action Sends China ETFs Reeling

The selloff in China country-specific exchange traded funds intensified Monday after Chinese regulators continued their crackdown on the technology sector, notably companies that engage in online and in-person education.

China ETFs that don’t track the China A-shares market or Chinese companies listed in overseas exchanges were among the worst off on Monday. For instance, the SPDR S&P China ETF (NYSEArca: GXC) declined 5.4%, and the iShares China Large-Cap ETF (NYSEArca: FXI) decreased 5.5%.

Beijing also issued new guidelines on treating food-delivery drivers, which fueled a 14% selloff in Meituan, one of the newer Chinese tech platforms.

China has been overhauling its tech segment to rein in big technology companies on issues ranging across data security, monopolistic behavior, and financial stability.

“The whole market is jittery about where China’s regulations and crackdowns are headed. Instead of waiting to find out, a lot of investors are just selling out of their position,” Justin Tang, the head of Asian research at United First Partners, told the WSJ.

Some observers argue that the changes reflect President Xi Jinping’s eagerness to exert greater control over the country and the economy.