The announcement last week by the SEC of the five Chinese companies that were not in compliance with the Holding Foreign Companies Accountable Act (HFCAA) shook already-volatile markets. KraneShares recently discussed what this means for investors who currently have allocations to the KraneShares CSI China Internet ETF (KWEB), which experienced record inflows in 2021, in a paper on the company’s website.

KWEB does not have any allocations into the five Chinese companies that were specifically named by the SEC last week, where failure to be in compliance means delisting from U.S. markets in 2024. The announcement by the regulatory agency came after these particular companies filed their annual reviews with the SEC, and is the first such instance in a series that is expected to continue throughout the year as annual reviews come due.

The issue stems from conflicting regulations between the U.S. and China; the HFCAA requires that foreign companies allow the Public Company Accounting Oversight Board (PCAOB) access to their audit papers, while Chinese regulations prevent it. Chinese companies were allowed to list on U.S. exchanges with all parties aware that they could not meet the current regulations with the hope that the two countries could be able to come to a compromise that would allow them to continue to be listed. However, this compromise was never found.

The Conversion of KWEB to Hong Kong Shares

KraneShares ultimately anticipates that all Chinese ADRs will be declared non-compliant and delisted in 2024. “KraneShares has already converted the majority of our ADR holdings to their Hong Kong-listed counterparts, where available,” the paper says.

So what does it mean for KWEB specifically? “We expect the portfolio to be comprised of solely Hong Kong listings by the end of the year driven by continued US ADR conversion and re-listings in Hong Kong,” KraneShares writes.

KraneShares has added an addendum to its KWEB page that continues a daily update of secondary listings so that advisors can see the progress being made on conversions from ADRs to Hong Kong shares. 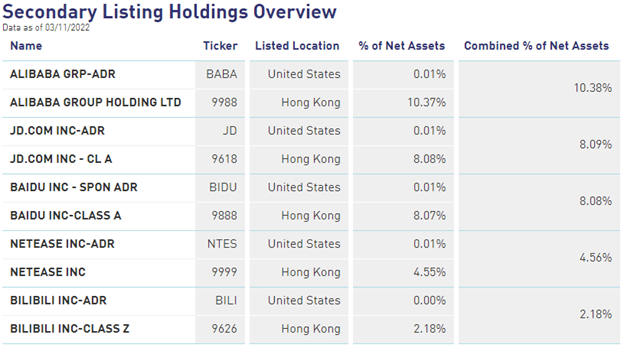 “This is a fluid situation and we know that the China Securities Regulatory Commission (CSRC) and Ministry of Finance (MOF) have been discussing a potential solution to this issue with the PCAOB. We believe a compromise between US and Chinese regulators is still attainable, but we are converting our ADR holdings to Hong Kong shares because we believe doing so is in the best interest of our clients,” KraneShares explains.