An Advisor’s Guide to Which Industries Would Drive Inflation Down

Skyrocketing oil, wheat, and other commodity prices driven higher by Russia’s invasion of Ukraine may have markets anticipating longer-term, high inflation, but economists still predict inflation to fall to between 2.7 and less than 5% by December, reported the Wall Street Journal.

Predicting inflation and how it rises and falls has generally been complicated but doable in a process that considers the performance of various parts of the economy, including supply and demand and economic slack. The onset of the COVID-19 pandemic upset all standard inflation models based on metrics such as unemployment. However, economists have to break down predictions into micro components to try and get a grasp on a more accurate forecast for inflation. 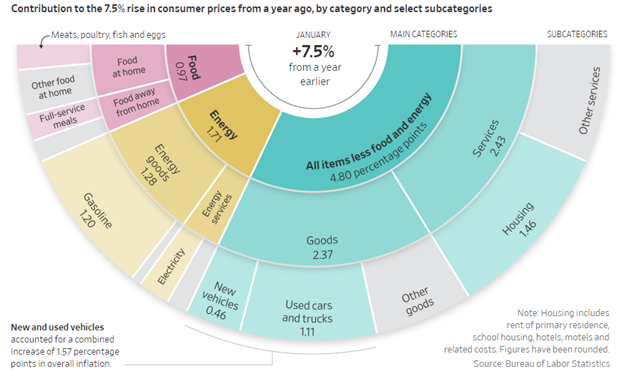 The Auto and Furniture Industries

The auto industry, specifically car prices, is a component of what makes up core inflation, not for how many are being purchased but for how much their prices rise or fall. Between the space of January 2021 to January 2022, used car prices rose a staggering 40.5% and contributed 1.1% to overall inflation. New-car prices rose 12.2%, contributing 0.5% to inflation.

Prices within the auto industry were driven high largely because of supply chain issues and semiconductor shortages worldwide. As production starts to catch up eventually, increasing supply will help to drive prices back down, but fallout with Russia could create issues for new car manufacturers as Russia is a key exporter of palladium that’s used in catalytic converters. Overall, many analysts anticipate price declines by December for new and used autos, which would bring overall inflation numbers down.

Another industry hit by supply chain issues is home furnishings and supplies, which saw soaring demand outpace supply with prices rising 9.3% in January 2022 and adding 0.4% to inflation. While furniture, bedding, and appliance manufacturers have ramped up their ability to fulfill orders in recent months, conflict in Ukraine and subsequent supply chain impacts could slow this once more. Aichi Amemiya, senior U.S. economist at Nomura, anticipates that by December 2022, furniture and bedding prices will have decelerated to a 10% increase compared to a 17% one in January.

The Role of Rent and Energy

Rent makes up roughly a third of CPI as the Labor Department determines housing costs based on current and new leases and are divided into tenants’ rent and then owners’ equivalent rent (OER), or an estimate of what an owner would pay to rent their home based on prices in their area. Rent, initially down at the onset of the pandemic, has since rebounded with the creation of 1.4 million new households in 2021.

OER in January grew 4.1%, the fastest it has risen since 2007, and tenants’ rent rose 3.8%. These numbers are expected to grow, driven by the lowest rental vacancy rate since the 1980s and a strong labor market.

Energy is another main sector driving inflation, rising 27% in January 2022 and adding 1.7% to inflation. Surging gas in January drove a good portion of the inflationary growth as gas accounts for about half of the energy consumption. While gas prices are soaring now, the futures market is anticipating crude oil prices will eventually flatten and then move downwards by the end of the year, decelerating to 9.4% growth in December 2022, adding to shrinking inflation.

Investing in Deflation with BNDD

BNDD seeks to hedge against deflation risk while creating positive returns at times when the U.S. interest rate curve flattens or inverts. It invests in Treasures with different maturities either directly or via ETFs that invest in Treasuries. The options the fund uses are tied to the U.S. interest rate curve, are traded on the OTC market and include long options, long spreads, and butterflies (an options strategy that uses both bear and bull spreads) in an attempt to limit loss by the fund.