You are at:Home»Featured»China ETFs Retreat on Concerns Over the Private Sector 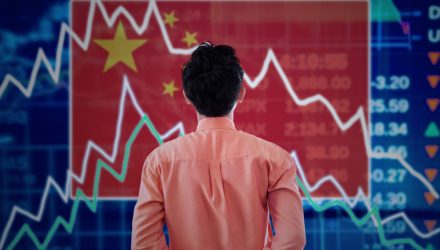 China ETFs Retreat on Concerns Over the Private Sector

China country-specific exchange traded funds plunged, with Chinese markets suffering their worst fall off in five months, on Thursday as investors grow wary over the trajectory of the economic recovery ahead.

While data revealed that China’s economy rebounded to expand at a larger-than-expected 3.2% in the second quarter – the first economy to grow since the coronavirus pandemic, China’s retail sales unexpectedly contracted 1.8% year-over-year in June and auto sales plunged 8.2% by the same measure, the Wall Street Journal reports.

The rebound was “uneven across sectors, with infrastructure, property investment and public services leading the growth recovery, while the private sector has shown continued weakness,” HSBC economist Jingyang Chen said in a note, highlighting the ongoing weakness of consumer spending and private investment, which are needed to recover for employment to stabilize.

The steepening sell-off on Thursday comes off a couple of lackluster sessions after signals that authorities want to avoid markets overheating. The Chinese markets have surged this month after government officials stated this was a bull market in the making and incited retail investors to enter the market.

“It’s very much a story of government stimulus-led recovery, which is very much focused on the industrial side. The consumer remains very cautious. That cautiousness is something the market is looking at in terms of countries where the consumer plays a bigger role, so that’s obviously relevant for the U.S. as well,” Rodrigo Catril, a foreign exchange strategist at NAB in Sydney, told Reuters.

Colin Low, the Senior Macro Analyst at FSMOne.com, also argued that the recent geopolitical tensions had further weighed on the market, referring to President Trump’s signing into law a bill to punish Chinese officials over Beijing’s new security law in Hong Kong.