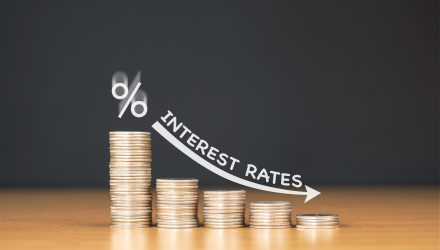 While it has been something that the Federal Reserve has eschewed thus far in its remarks, negative interest rates may be necessary for the economy to recover completely, according to a St. Louis Federal Reserve economist.

As stocks continue to scurry higher, with the SPDR Dow Jones Industrial Average ETF (DIA) finishing up more than 1% Tuesday, many economists continue to doubt the likelihood of the current historic decline being followed by an equally aggressive recovery. Yet, central bank economist Yi Wen said in a paper on the St. Louis Fed’s website that accomplishing such a rebound is both necessary and possible.

Such a recovery will not be achieved however, without proper additional support from the government.
According to Wen, aggressive stimulus even beyond what authorities utilized during the financial crisis might be required, which could mean we would see interest rates below zero, something that Fed Chairman Jerome Powell has been unsupportive of thus far.
“The committee’s view on negative rates has not changed. This is not something we’re looking at,” Powell said in a videoconference with the Peterson Institute for International Economics recently.
He explained to former Fed Vice Chair and now Princeton University economist Alan Blinder, “We don’t think that’s an appropriate tool here in the United States. I would say the evidence on whether it actually works is mixed. There are clearly some negative side effects, as there sometimes are with these things, and it’s just not clear to my colleagues and to me on the Federal Open Market Committee that this is a tool that would be appropriate to deploy here in the United States.”

Wen compared the response to two major U.S. economic downturns in history, the Great Depression and the financial crisis, Wen discovered that the use of aggressive fiscal response through President Franklin Delano Roosevelt’s New Deal helped create a V-shaped recovery after the Depression, while mainly monetary responses such as low interest rates and Fed asset purchase programs initiated during the financial crisis resulted in an L-shaped recovery in which GDP failed to be maximized.

Thus, the central bank economist noted that a multi-faceted approach to bolstering the economy may be necessary to achieve the desired outcome.

“I found that a combination of aggressive fiscal and monetary policies is necessary for the U.S. to achieve a V-shaped recovery in the level of real GDP,” Wen wrote. “Aggressive policy means that the U.S. will need to consider negative interest rates and aggressive government spending, such as spending on infrastructure.”

He further explained that such policies may need to continue beyond what appears to be a recovery to avoid stumbling back into an economic pit.

“Importantly, these policies also need to continue even when the crisis is about to end to provide a further boost, leading to a more robust recovery,” he wrote. “Furthermore, it’s the combination and coordination of both monetary and fiscal policies that provides enough stimulus for a V-shaped recovery. In other words, aggressive monetary policy — such as negative interest rates — may be ineffective on its own without aggressive fiscal stimulus.”