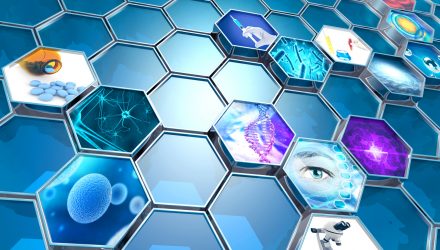 Biotechnology stocks and biotech ETFs tumbled in the back half of March and to start April. For example, the SPDR S&P Biotech ETF (NYSEArca: XBI) came into Monday with a loss of almost 12.6% over the past month, but there are still come compelling catalysts at play for biotechnology investments.

The slump in once hot biotechnology ETFs could present investors with a buying opportunity. Healthcare stocks are also showing attractive valuations relative to other defensive sectors, which are richly valued. Biotechnology historically trades at multiples that are elevated relative to broader benchmarks, but after last year’s of struggles for biotechnology names, some analysts see value with some big-name biotech stocks.

“One reason biotech stocks may continue this march higher is the fresh wave of M&A activity that has been spurred, in part, by the tax bill,” said State Street Global Advisors (SSgA) in a note out Monday. “The new tax law cuts the corporate tax rate from 35% to 21%, and encourages companies to repatriate overseas income held as cash at a tax rate of 15.5% instead of 35.5%. The result is that biotech and pharmaceutical companies, which are estimated to have roughly $228 billion in cash overseas, now have extra cash on hand to pursue M&A.”

XBI holds 116 stocks with a weighted average market capitalization of $10.48 billion, meaning the ETF is not heavily dependent on large-cap biotech names. That also means XBI is home to some credible takeover targets, which is potentially good news for investors at a time when healthcare M&A activity is surging. In the first three months of the year, $70 billion in biotech deals have been announced according to SSgA.