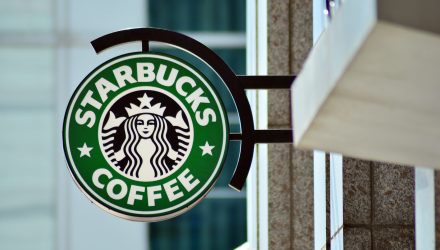 Starbucks Corp. was recently upgraded to buy from neutral at BTIG, as analysts anticipate declining coronavirus infections, restaurant re-openings, and federal stimulus cash that will hit consumer bank accounts. If the stock climbs, the move could help consumer discretionary ETFs as well.

While the capital markets company maintained its $130 price target, BTIG noted that the re-openings are occurring “faster than expected,” and it expects same-store sales to improve throughout 2021 as a result.

With new customers potentially coming in the door, Starbucks plans to begin testing Cold Pressed Espresso in some cafes by the end of the year, as consumers typically stick to cold drinks for their caffeine jolt.

Cold beverages, which are especially popular with younger consumers, have been pivotal in growing the chain’s same-store sales in recent years. In the last three years, consumers have spent more than $1 billion on Starbucks’ cold drinks.

“More than 50% of the beverages that we sell at Starbucks are cold,” CEO Kevin Johnson told Kate Rogers in an interview on CNBC’s “Halftime Report” on Wednesday.

Johnson believes that after the pandemic dies down, consumers will seek out more social interaction. The CEO does recognize customers will also likely still be using drive-thru lanes or mobile ordering to purchase caffeinated beverages.

Starbucks is also prepping to inaugurate one of its first sustainable roasting plants in China next year.

“It’s this one thing that we’re doing to not only reduce our carbon footprint, ultimately to get to net zero, but ultimately to store more carbon than we emit,” Johnson said. “That’s our long-term agenda, and we’re committed to that.”

Shares of Starbucks have climbed more than 86% over the last year, giving the company a market value of $129 billion. Like many companies, the coffee maker has struggled with sales during the pandemic. But its recovery in the U.S. and China are swifter than anticipated, with the company forecasting U.S. same-store sales growth of 5% to 10%, as early as next quarter, while Chinese same-store sales are expected to almost double.