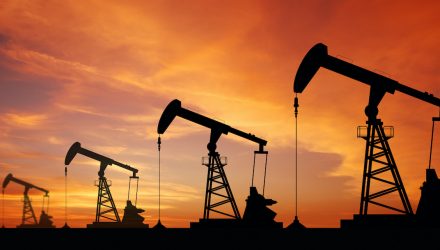 While stocks are moving higher, crude oil is losing considerable ground Thursday, after scoring a two-month high on Wednesday, as U.S. crude exports tumbled, and indications of a swifter economic recovery and forecasts for increased energy demand drove prices higher.

U.S. benchmark, West Texas Intermediate crude oil, is down over 4.45% on Thursday, trading at $63.24 per barrel, for a more than $2.90 loss. The move has been driving crude ETFs like the United States Oil Fund (USO) and the ProShares Ultra Bloomberg Crude Oil (UCO) lower as well.

One key factor in the U.S. inventory report that affected prices was a 2.2 million bpd loss in total oil products. That was the largest weekly fall and lowest weekly demand since the start of the year.

The International Energy Agency (IEA) noted in its monthly report that crude demand is already outstripping supply and the dearth is projected to increase even if Iran boosts exports, something that consumers have been feeling at the pump recently, as gas prices have been surging.

Similarly, the Organization of the Petroleum Exporting Countries (OPEC) on Tuesday reaffirmed projections for a robust recovery in global oil demand in 2021, with growth in China and the United States overcoming the impact of the coronavirus crisis in India, which has continued to infect thousands.

“Oil prices today are experiencing a lift on positive demand outlooks released by OPEC and IEA, which both came out with a similar consensus that oil demand will average 96.4 million bpd in 2021,” said Louise Dickson, oil markets analyst at Rystad Energy.

Investors and crude traders were also encouraged by economic data that revealed that Britain’s pandemic-ravaged economy increased more than expected in March, while U.S. consumer prices increased in April by the most in nearly 12 years, as rising demand in a reopening economy strained supply.

“With the ongoing easing of restrictions, confirmed this week by the prime minister, there’s hope that this could be the start of a long hot summer for British businesses.”

Crude experts, while noting the steep drop on Thursday, suggest that there may be some bargain buying as prices fall, something that may be supported by technical analysis.

“The West Texas Intermediate Crude Oil market has fallen rather hard during the trading session on Thursday as we continue to go looking towards support underneath at the $64 level. We are also in the midst of a major ascending triangle that should not be forgotten either. It is because of this that I anticipate that we will probably see some value hunters in this general vicinity try to push this higher. However, if we were to break down below the 50 day EMA then we could be looking at a bit of a deeper correction. Until then, I assume that this market continues to go higher over the longer term,” wrote Christopher Lewis, a technical crude analyst at fxempire.com.