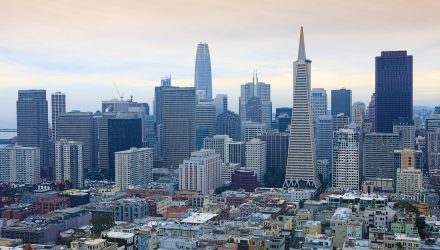 Small-cap stocks and the related ETFs are outperforming large-cap equivalents this year, a trend some market observers expect will continue through year-end. The iShares Russell 2000 ETF (NYSEArca: IWM), which follows the benchmark Russell 2000 index of small-cap stocks, is up 12.55% year-to-date compared to 7.74% for the large-cap S&P 500.

While it’s still early, the warnings about currency risk, notably a stronger greenback, indicates multinational firms could face an increasingly tough period ahead. S&P 500 companies previously generated one of their strongest quarterly earnings, partly due to a depreciating U.S. dollar – the weaker dollar benefits large-cap U.S. multinationals by making exports cheaper to foreign buyers and also causing overseas profits to look bigger when converted back into USD.

“As we move into the second half of the year, the market environment is positioned well for U.S. small cap equities to remain one of the preferred markets,” Stifel global head of investment strategy Michael O’Keeffe said in a note to clients Friday, reports CNBC. “Small business owners continue to anticipate greater sales and even better business conditions for the remainder of the year. We expect this to result in increased investment spending that ultimately leads to GDP growth.”

Stifel’s O’Keeffe said “small companies have less exposure to international markets than companies in the S&P 500 in the event the global trade environment deteriorates,” according to CNBC.