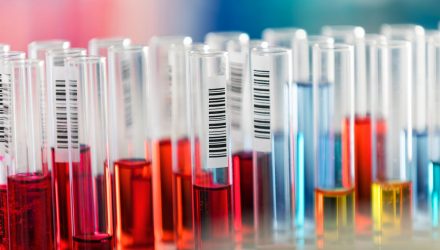 Biotechnology ETFs have been getting plenty of positive attention in recent weeks, a trend that certainly extends to the SPDR S&P Biotech ETF (NYSEArca: XBI). The equal-weight XBI, the second-largest biotech ETF by assets, is up more than 40% year-to-date, making it one of this year’s best-performing non-leveraged ETFs.

There are plenty of fundamental accolades pertaining to biotech stocks and ETFs such as XBI. The group is attractively valued relative to historical norms and biotech has a historical tendency to perform well in the fourth quarter, among other near-term positives for the sector. It appears some traders are reacting to those themes.

“So far today, XBI has seen roughly 38,000 calls change hands — more than four times the number of puts traded, and seven times the fund’s average intraday call volume. XBI call volume is now pacing for the 99th percentile of its annual range. Most of the action centers on the overhead November 90 call, where a trader seemingly bought to open 22,218 contracts this morning, at $2.06 apiece, or about $4.6 million total,” according to Schaeffer’s Investment Research.