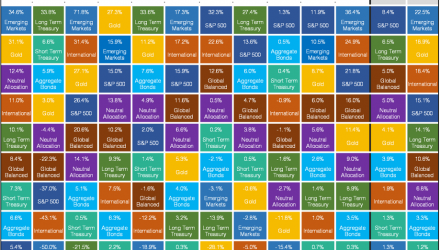 Markets continued to rise across the board with little to no reaction to any negative news coming their way. Most major economies across the globe ended positive for 2017 with record low volatility. How low?

We experienced 52 todays in 2017 where the VIX (a measure of volatility, or risk) closed below 10, which has only occurred 9 times prior to 2017. We have now reached one of the longest stretch in market history without a 5% pullback, surpassing the 1996 run. This isn’t meant to say a market correction is around the corner. There are a number of signs that likely occur prior to a traditional market correction, two being a last leg increase in commodities prices, and finally increasing credit spreads, neither of which have occurred in any substantial manor.  But it does put a little perspective on the euphoric environment we find ourselves in today. Consumer confidence is higher than any point in history excluding the tech bubble, after rebounding from an all-time low in 2008.  There is also always the possibility of a shorter term quick market correction that won’t look like traditional.

The US Federal reserve continued to wind down its balance sheet in 2017. While this was occurring, the overall growth of quantitative easing around the world continued to grow, and its growth was still significantly correlated to global equities.  This is possibly one of the biggest changes set to occur in 2018, as the overall level of global quantitative easing will decrease for the first time since its beginning 8 years ago. Starting in July, the net purchases of the US Fed and the ECB become negative, and at an increasing rate in the 4th quarter of 2018 as the ECB winds down their purchasing.  By December 2018, the US Fed and ECB will be unwinding over $40 billion a month in quantitative easing. If correlations between Central Banks and global equities continue to hold, this could be bad for equity and fixed income markets. 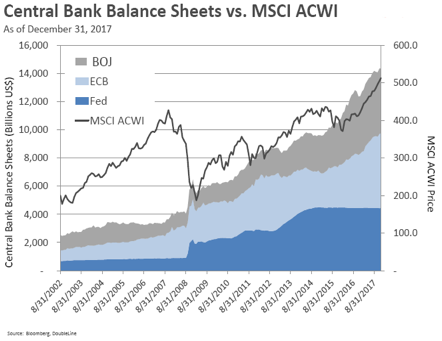 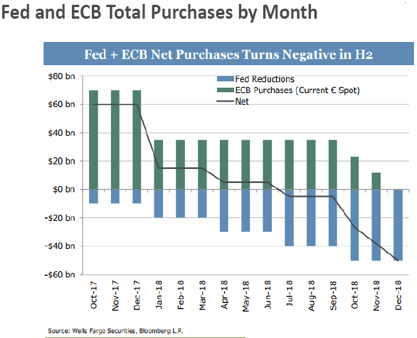 We also experienced the birth of the cryptocurrency and blockchain ecosystem on the general public.  If considered a commodity, you could argue we’ve already experienced significant inflation as the overall value of the category rose from just north of 16 billion at the beginning of the year to over half a trillion dollars.  This expansion is the 6th largest in history (in terms of cumulative growth) and 4th in duration.  It will tie for longest in duration at the start of the 4th quarter, if continued uninterrupted.

The S&P 500 TR Index returned 6.64% in the fourth quarter, and 21.79% for all of 2017.  We have now experienced 8 straight years of positive returns from the S&P 500, tying its longest streak ever. Similar to 2016, this was very much lead by the FAANG (Facebook, Apple, Amazon, Netflix, and Google) stocks.  So much so that the S&P 500 Growth Index outperformed the S&P 500 Value Index by 12% in 2017, despite having a 28% overlap. Unlike more traditional equity rallies where the S&P 500 returns north of 20%, small caps significantly underperformed, returning 13.2% for the year, even after outperforming the broader index by 3.44% in December.  It will be interesting to see how the Federal Reserve reacts to market movements this year. Four of the seven seats on the Federal Reserve are currently empty, and only 3 remaining from the group that initially built the now bloated balance sheet starting 9 years ago.  Historically, new Fed Chairs have tended to overtighten, which will be something to look out for in 2018.  This, coupled with mid-term elections and ongoing investigations into the Trump team, make the likelihood of increased volatility in 2018 probable.

The MSCI EAFE Index returned 4.17% for the fourth quarter, and 24.94% for all of 2017, out-pacing US equities for the first time since 2012.  The European central bank increased future GDP growth forecasts for 2018 and beyond, for the first time in years.  Valuations are a fraction of what can be found in the US, and for the time being, their central banks continue purchasing more and more quantitative easing.  Areas of concern surround where global PMI (purchase managers index) lies, as global PMI hit an all-time high in December at 54.5. The UK, Eurozone, Japan, and Emerging Markets all hit all-time highs in either November or December.  The US and China were two of the biggest economic powers that did not approach all-time highs.

The MSCI EM Index returned 7.26% for the fourth quarter, and 36.42% for the year.  Emerging Markets outpaced US Equities for the first time since 2012.  From 2013 through 2016, the S&P 500 returned 70.5%, while emerging markets returned -12%.  If the global rally continues, discounted valuations in the emerging market space will likely drive continued outperformance.  Investment themes such as excluding state-owned enterprises, or investments in the internet of things significantly outperformed broader indexes in this space.

The Barclays Aggregate Index returned 0.44% in the fourth quarter, and 3.53% for 2017.  We experienced 3 rate hikes in 2017, bringing short-term interest rates to 1.5%.  One thing to note is the long end of the curve did not move in unison with the short end of the curve, causing the curve to flatten.  If further interest rate hikes occur without effecting the long end of the curve, we enter an environment called an inverted yield curve (or negative yield curve), which is historically a predictor of economic recessions to come.  There are many theories why the long end of the curve has stayed suppressed; some argue international buyers are capping its upside as rates internationally are so low.  This was much more likely before we increased rates all the way up to 1.5%, as the spreads between most other sovereign bonds and the US have similar spreads at the 2-year mark as they do at the 10 year mark.  While we are not predicting an immediate spike in long term interest rates, if the economy continues to grow we will eventually see rates rise on the longer end of the curve.