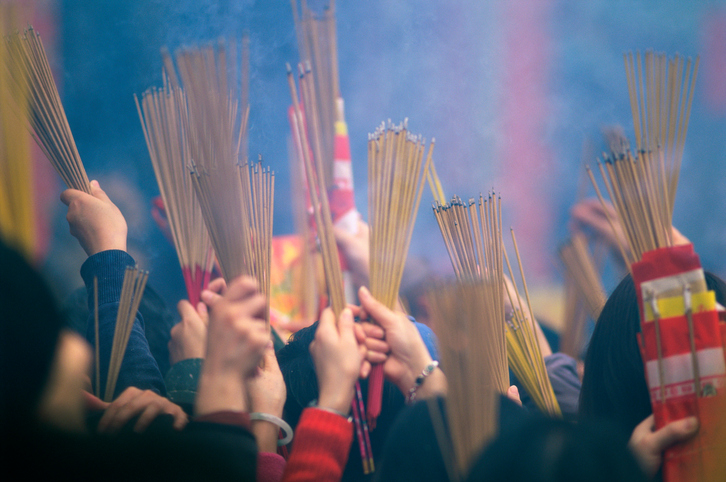 To start 2018, many surveys, when asked the question “where will investors look to increase exposure in 2018?” had a similar response: Emerging Markets.

Part of this is certainly because EM had a stellar 2017, outperforming the S&P 500 and once again gaining confidence of investors after years of disappointment. We would tend to agree that investors should have exposure here, but there are some fundamental reasons that support this, outside just how the market has done.

Of course, EM is a higher risk market than developed markets, which also means it should offer higher return potential. Until last year, that had not been the case for quite a while. In fact, risk taken was higher, but returns were lower than other markets.  2017 broke from that refrain… and one of the few markets to top US large caps (not even small or mid-caps could say that last year).

Here’s some key reasons EM look attractive at this point in the cycle.

1) The Global Economy – synchronized global growth. This is the best place to start as it is the key driver. Yes, this late in the economic cycle, the economy has reached its prime. As a result, emerging market composite PMI growth (Services and manufacturing) accelerated in the back half of 2017. Frankly, the first few years of this market recovery existed with an economy recovering from a grave illness. (Let’s call this 2009-2011).  Additionally, most of the international economies were about a year behind the US in the recovery process (give or take). With that all said, maybe it makes sense that we’re are seeing this coordinated growth at this point of the cycle. Regardless, it is happening. Interest rates are accommodative enough. Even with recent bouts of higher rate moves, it was in response to positive economic developments that has introduced the inflation concept back into this market. That’s not a bad thing. This has also supported and increase in resource demand, which also supports the Emerging market theme. 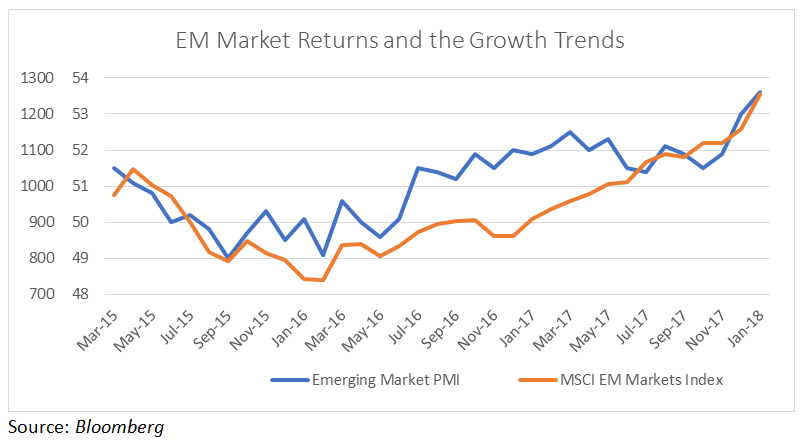 2) The US Dollar – While not the main driver, currency impacts certainly have an impact on international portfolio allocations. Drawing a point from the previous section, international economies were behind the US in the recovery. Initially this supported a one-way trade for the US dollar as interest rate policy and growth departed from other regions of the world, supporting a stronger dollar. As growth has emerged and some central banks have hinted at coming off the extremes off monetary easing (ECB, BoJ), the dollar came under pressure. In 2017, we saw a weak dollar benefit international exposure, both EM and Developed markets. As you can see by the chart below, we may see more of this to come, especially if the US deficit continues to accelerate. While not perfectly correlated, in the past 25 years when we’ve seen deficits accelerate, this has been a headwind for the dollar. The theme into Q1 hasn’t changed as the tax cuts are expected to increase this annual figure and approach $1Trn in 2019. 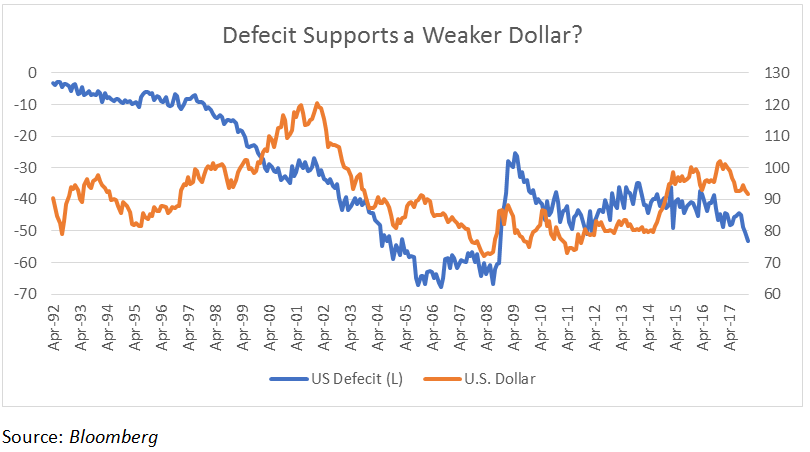 3) Return Expectations – Even with a strong 2017, Emerging markets have frankly lagged the US and developed markets in recent years. And for good reason. Growth was not strong enough. Now that has changed. Risk is starting to be rewarded again. Last year, MSCI Emerging market gained 37.68% versus 21.83% for the S&P 500. That’s quite an outperformance. However, when we go back over the past ten years, US large caps have dominated that conversation, as the S&P 500 has average 8.5% versus a 2.02% for the MSCI EM Index. While Sharpe ratios (amount of return for unit of risk, adjusted for risk free returns) were solid across the board in 2017, they heavily favor the S&P 500 in prior periods. While 2017 was a good start, this leaves a lot of room for improvement and catch up. Couple this with the fact that the forward-looking P/E in this region is approximately 13x versus the S&P 500 which is closer to 21x. While this is no guarantee of outperformance, the first two points above support a scenario where the disparity in performance might converge and favor emerging markets. 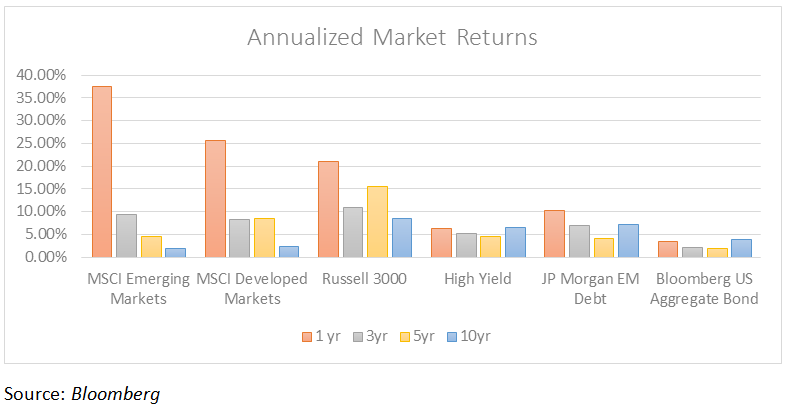