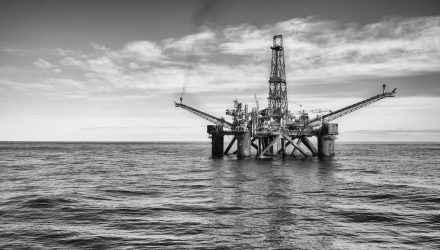 The Brent crude oil-related ETF continued to rally Monday as Brent futures hit its highest level in two years after a key North Sea pipeline was shut down.

The United States Brent Oil Fund (NYSEArca: BNO), which tracks Brent crude oil futures, was up 1.9% Monday as Brent futures increased 2.0% to $64.7 per barrel. BNO has increased 19.6% over the past three months and gained 9.1% year-to-date.

Crude oil futures strengthened Monday after the Forties Pipeline System, one of the most important oil conduits in the world, is planned to halt production after a crack was discovered, reports Jessica Summers for Bloomberg.

“Brent is ripping,” Bob Yawger, director of futures at Mizuho Securities USA Inc., told Bloomberg. “You really don’t have a lot of spare barrels before the supply situation becomes a problem.”

The Forties Pipeline System flows into the Hound Point export terminal near Edinburgh, Scotland, pumping over 400,000 barrels of crude oil per day and contributing to the single largest constituent part of the Dated Brent grade that helps settle over half the world’s physical oil prices.