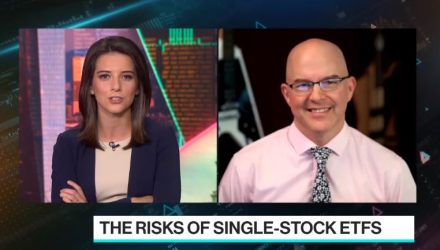 Bloomberg: Dave Nadig on the Risks of Single-Stock ETFs

The amount of news regarding Single-Stock ETFs keeps coming in, particularly regarding the growth potential and the target market. It is also worth keeping in mind the risks. VettaFi’s financial futurist, Dave Nadig, was on hand during Bloomberg Market’s Tripple Take to discuss what to keep in mind and what to look out for when considering these funds.

While these products haven’t been around for too long and do not feature too many assets, were they to grow into multi-million dollar products, Nadig notes how the risks could be similar to the past regarding situations such as the VIX complex. Some very large VIX-tied leveraged ETFs had similar characteristics. It involved an end-of-day rebalance to receive consistent and full exposure.

“When they get big enough, they start becoming a meaningful part of end-of-day trading,” Nadig adds. If there was a point where there was a mismatch between the liquidity of the underlying stock and the single-stock ETF, there could be a real problem.

Given the heavy involvement of Tesla, particularly TSLL, given the way things are going, there’s likely nothing that’s really going to disturb the market. Add a “0” to that fund, and even in Tesla, there starts to be end-of-day buying that becomes very predictable every time it’s up. For Nadig, the worst-case scenario would be having 500 stocks covered by these funds with 3-5 variants each – thousands of tickers – inevitably, one of those securities is going to the next larger company, which could lead to some problematic market structure issues.

As far as finding any room for risks being potentially less impactful compared to these similar scenarios of the past, Nadig is not so sure about this. “You can’t really pick and choose for an end-of-day rebalance. If they simply chose not to rebalance at the end of a given day because Telsa is up 10% and they felt like they were going to be adding froth to the mixture, that means tomorrow they’d be going in with the wrong exposure. It would mean they’d be underexposed, and if it goes up 10% tomorrow, it would no longer track.”

While the active management may provide a bit of a pass with the SEC on a few things, the fundamental math problem is not solved – “should some of these get over their skis in terms of how big their funds are versus the underlying.”

Looking at investor behavior, as far as whether or not this encourages more trading over investing, Nadig feels regulators have been pretty clear when putting out these products – they are nervous too. Could it engender more trading – perhaps for sophisticated investors and day traders. However, those who are a bull on Tesla may see what may come across as a good idea, only to hold onto the fund for six months instead of a day, which is a real problem for leverage and inverse funds.

“I have no doubt that, mathematically, these products are going to do exactly what they say they’re going to do,” Nadig adds. “The problem is, what these funds do can inherently be a little bit risky and a little confusing.”