You are at:Home»Investing»Blockchain ETFs Launch Without ‘Blockchain’ in Name 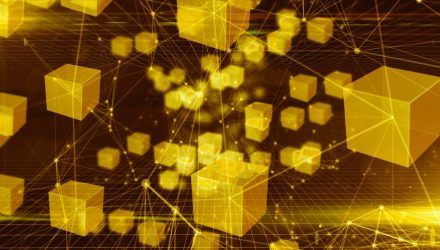 Perhaps the hottest word in the tech sector right now is “blockchain”. Blockchain, a sort of digital ledger for cryptocurrency transactions, is most commonly associated with Bitcoin, but could have an immense number of other technology applications. The potential of blockchain is enough that some companies are transforming their businesses to get in on the trend.

Take Long Island Iced Tea, for example. The beverage maker decided to make a complete strategic pivot by deciding to focus instead on opportunities in blockchain technology. The new company, Long Blockchain (NASDAQ: LBCC), saw its stock rise around 250% on the news. Or look at the case of Bioptix. The biotech company changed its focus and became Riot Blockchain (NASDAQ: RIOT). The stock rose from the single digits to nearly $40. Or Kodak. The 129-year-old film business decided to launch KodakCoin, pushing the stock price from $3 to more than $12.

The running joke is that companies only need to add the word “blockchain” to their name in order to triple their value, but the SEC is not as impressed. Two new ETFs launched this week – the Amplify Transformational Data Sharing ETF (NYSEARCA: BLOK) and the Reality Shares Nasdaq Blockchain Economy ETF (NASDAQ: BLCN). As was the case with bitcoin ETFs, the SEC has shown little tolerance for excessively volatile products that could harm investors.

Supposedly, the SEC has asked the two funds to remove the “Blockchain” from their names. Could it be a way of stemming off the flood of money potentially moving into these products? Maybe. The ETFMG Alternative Harvest ETF (NYSEARCA: MJX) doesn’t seem to have trouble attracting assets despite not having the word “marijuana” in the name. The funds could still launch this week, but expect the SEC to continue taking a hardline stance against risky assets.