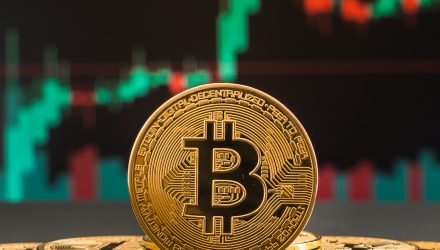 Bitcoin Gets A Boost As Gold Surges

With Gold surging higher Monday as investors seek out lucrative alternatives to low yields, Bitcoin spiked above $10,000 for the first time since early June after tepid price movement recently.

“Bitcoin is currently realizing its reputation as a form of digital gold. Up to now, gold has been known as the ultimate safe-haven asset, but Bitcoin—which shares its key characteristics of being a store of value and scarcity—could potentially knock gold from its long-held position in the future as the world becomes evermore tech-driven,” Green said.

The cryptocurrency was trading close to $10,200, roughly 2.55% higher than 24 hours previously, according to data from Coindesk.

It has been nearly two months since Bitcoin last exceeded $10,000 and has since seen a steady drop. But over the last week, the famed cryptocurrency has climbed nearly 11%.

Vijay Ayyar, head of business development at cryptocurrency exchange Luno, noted that large players were considering whether to sell off their bitcoin to smaller entrants in the market which could stymie the price and make it more attractive for the bigger traders to buy more of the digital asset.

“This doesn’t seem to have happened,” Ayyar said. “What we have unfolding is potentially re-accumulation by big players, joined by smaller traders in an attempt to push BTC higher past 10K and more past 10.5K, which is the big resistance level, where BTC last put in a high.”

“We still haven’t broken the 10.5K level, if that happens, BTC is probably running to 15K. All signs point to that at this point,” he added.

In addition to being bolstered by recent economic stimulus packages from governments and central banks around the world in an effort to stamp out the economic fallout from the coronavirus pandemic, investors are vigilantly monitoring the plethora of coronavirus vaccines being developed around the world, hoping for a panacea.

Ayyar said that bitcoin could receive a boost from these stimulus measures as well as optimism over a vaccine.

“My view is that with the major governments declaring unprecedented stimulus packages … we will see continued bullish momentum across markets. So that includes equities and gold as well. And BTC and crypto will follow in this regard. Added to the fact that a vaccine seems within reach as well now, no reason to be bearish near term,” Ayyar said.

While the crypto has been slow to move above $10,000 recently, analysts say that a strong move could propel Bitcoin even higher.

“The Bitcoin price crossed above the 10K mark and the price action looks bullish now as the price has cleared a major psychological level that has been there for a long time,” said Naeem Aslam, Analyst at AvaTrade, in a research note.