You are at:Home»Alternative ETFs»The Bitcoin ETF Race is Quickly Intensifying 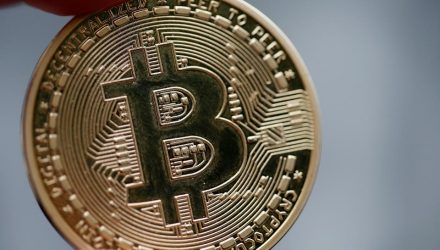 The timeline for approval of the first bitcoin ETF got a little shorter this past Sunday evening as futures contracts based on bitcoin began trading on the CBOE.

While trading volume didn’t exactly blow the doors off, the January 2018 contract had a trading volume of about 4000 contracts after roughly the first day, the initial action was relatively brisk for a brand new product. Perhaps the most notable event from the first day of trading was that the January contract price was volatile enough that trading had to be halted multiple times in accordance with CBOE rules. As of this writing, the futures contract price was more than $1000 above the spot price, indicating that traders expect the rally in bitcoin to continue.

What the launch of bitcoin futures does is it puts a more definitive timeframe around the debut of the first bitcoin ETF. I suppose “definitive” may not be the best word to use given that an ETF hasn’t even been approved by the SEC yet, but the bitcoin futures contract gives regulators an underlying asset that they’re likely more comfortable working with in establishing an exchange-traded product.

One of the concerns around the original bitcoin ETF filing, the Winklevoss Bitcoin Trust ETF (COIN), was that it would be storing an asset unregulated by the SEC. Another concern is the physical safekeeping of the digital currency. Just recently, hackers made off with about $75 million worth of bitcoin from the cryptocurrency marketplace NiceHash. About a month ago, Parity, a maker of open-source digital currency wallets, inadvertently locked up more than $150 million in ethereum tokens due to a technical glitch. Now, SEC regulation isn’t necessarily going to impact the ability of hackers to steal digital currencies or prevent computer errors from taking place. But the SEC’s job in approving products is to protect investors, and these types of activities likely aren’t going to do any favors to those ETF filings that look to store actual bitcoin. Bitcoin futures help ease some of that concern by building an ETF that will use a regulated asset as part of its strategy.

So when can we expect a bitcoin ETF to hit the market? ETF.com’s Dave Nadig said back in September that he thought we’d see a bitcoin futures-based ETF by the end of 2017, which seems unlikely now. My initial thought was maybe by the end of the 1st quarter of 2018. That would give the SEC a little time to see how bitcoin futures trading is working before moving forward to an ETF approval. Another article posted by ETF.com quoted Bloomberg’s Eric Balchunas saying that he expects a bitcoin ETF by next summer. The timing of a bitcoin ETF approval may come in weeks or it may come in months. At this point, though, it’s safe to say that it’s coming and it’s coming soon!

Which bitcoin ETF will get approved first is some matter of speculation, but there are no shortage of proposals vying for the title. Sure, there are already a few options for investors who want to get in on bitcoin without actually buying bitcoin. Grayscale’s Bitcoin Investment Trust (OTCQX:GBTC) is probably the most popular alternative, but it’s a trust, not an ETF (and happens to trade at a 45% premium to the spot price of bitcoin right now). Saxo Bank launched two exchange-traded notes based on bitcoin, but those trade over in Europe. A bitcoin ETF, once it arrives, is going to be a simpler, more accessible option for regular investors who want a convenient way to get in on the bitcoin craze.

There have been more than a dozen different filings for a bitcoin ETF, although some are already off the table. Most plan on using bitcoin futures. There’s no doubt that multiple bitcoin ETFs will eventually come to market, but there’s always the added advantage of being the first. Which one of these filings has the best chance of winning the race? Let’s take a look at the contenders.

This is the original and easily most well-known bitcoin filing backed by the Winklevoss brothers themselves. After much deliberation and discussion, the SEC rejected the filing earlier this year due to its potential for manipulation and its lack of regulatory oversight, a feature that many users would argue is a benefit, not a drawback. Bats Global Markets, the operator of the exchange on which the ETF would reside, filed a petition for review a couple weeks later, and the SEC has agreed to consider it. Nothing has really happened since then.

At this point, there’s no real reason to think that the SEC’s thought process has changed. The issues the regulatory body had with bitcoin originally still exist and will likely continue to exist into the foreseeable future.

Verdict: Unlikely
An ETF backed by actual bitcoin could become a reality down the road if the SEC grows more comfortable with how bitcoin and other cryptocurrencies trade and operate, but it’s difficult to see that happening anytime soon.

The Bitcoin Investment Trust, mentioned earlier, currently trades over-the-counter in a less formal environment. The NYSE Arca exchange wanted to list it, essentially paving the way to have it trade much like an ETF. The application was withdrawn with Grayscale noting that it didn’t believe the SEC would approve.

Verdict: Out
This product is essentially in the same boat as the Winklevoss ETF. Until the SEC gets more comfortable, it won’t happen. If the Winklevoss ETF gets approved, look for this one to try to follow suit.

SolidX attempted to improve upon the Winklevoss ETF model by using a composite of prices from multiple exchanges to determine the fund’s value (the Winklevoss ETF would just use the price from the Gemini exchange). It would also insure customer holdings up to $125 million for fraud, crime or other related activity. The writing was on the wall for this filing, however, when the Winklevoss ETF was rejected. The SEC used pretty much the exact same reasoning for denying the SolidX proposal.