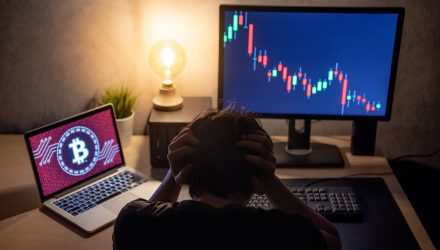 Bitcoin, the largest cryptocurrency by market value, has recently been in the news for all the wrong reasons. The digital currency’s recent slide below $6,000 took it perilously close to $4,000. At this writing, bitcoin prices resided around $4,278 at 2pm Eastern Friday.

However, bitcoin’s recent plunge and the rapid deterioration experienced by other digital currencies are not the only problems facing the crypto space.

“Despite hopes that 2018 would be a big year for mainstream adoption, research from blockchain analytics firm Chainalysis suggests that Bitcoin is swiftly losing popularity among major payment processors,” reports TNW. “The findings show the total amount of Bitcoin handled by payment processors has shrunk 80 percent during the first nine months of the year, Reuters reports.”

Bitcoin and other digital currencies have widely been seen as speculative, volatile assets. Many industry observers pinned hopes for shedding those labels on bitcoin becoming a more widely accepted form of payment for everyday use.

“The trend indicates that the cryptocurrency is struggling to mature from a speculative asset to a legitimate alternative to state-issued currency. Indeed, accounting giant KPMG recently drew the same conclusion in its own blockchain report (which has since been contested by industry insiders),” according to TNW.