You are at:Home»Featured»Biotech ETFs To Explore As Race For Covid-19 Vaccine Heats Up 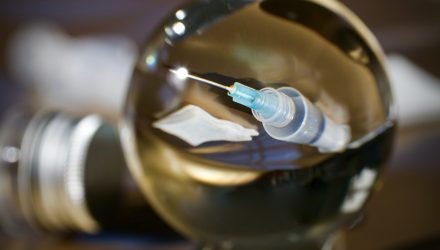 Governments around the globe are working feverishly on a vaccine for the coronavirus, which has resulted in data recently published by the New England Journal of Medicine revealing that the Moderna’s coronavirus vaccine produced a “robust” immune response, or neutralizing antibodies, in all 45 patients in its early stage human trial, which sent markets surging recently.

On Wednesday news was released that the U.S. will pay Pfizer and biotech firm BioNTech $1.95 billion to create and distribute 100 million doses of their Covid-19 vaccine if it is demonstrated to be safe and reliable, according to the two companies, marking the most significant deal between the government and companies on a quest to fast-track a coronavirus vaccine.

Under the agreement, the U.S. can obtain 500 million additional doses, the Department of Health and Human Services said. Germany-based BioNTech and Pfizer are working together to develop four potential vaccines.

Given that a vaccine is validated to be safe and efficacious in a large phase three trial and is granted regulatory approval, HHS said Pfizer will commence distribution of doses to locations across the U.S. at the government’s direction, which would then be made available to Americans “at no cost,” HHS said.

BioNTech and Pfizer had said they anticipate they will initiate a massive trial with up to 30,000 participants later this month, given they are granted regulatory approval, sending the stocks higher in trading. Shares of Pfizer were 3.8% higher in early trading Wednesday while BioNTech stock rallied 4%.

The companies announced earlier this month preliminary data for vaccine candidate BNT162b1, the most advanced of their four potential vaccines. Researchers said the early-stage clinical trial showed the BNT162b1 vaccine produced some neutralizing antibodies, which researchers believe is necessary to build immunity to the virus.

“We’ve been committed to making the impossible possible by working tirelessly to develop and produce in record time a safe and effective vaccine to help bring an end to this global health crisis,” Dr. Albert Bourla, chairman and CEO of Pfizer, said in a statement. “We made the early decision to begin clinical work and large-scale manufacturing at our own risk to ensure that product would be available immediately if our clinical trials prove successful and an Emergency Use Authorization is granted.”

Health officials have previously advised that one of the greatest challenges of rapidly unveiling a vaccine will be obtaining the supplies required to generate enough doses, as well as access to syringes and transport media. However, HHS Secretary Alex Azar said on CNBC’s “Squawk Box” later Wednesday that the government has supported the supply chain to enable the companies to produce enough initial doses to vaccinate the U.S.

“We’re not concerned about supply chain,” he said. “We’ve secured that to be able to ensure that we’ll be able to vaccinate the American people once we get vaccines that are demonstrated safe and effective to the FDA’s gold standard of approval or authorization.”

A number of companies have been involved in what has been known as Operation Warp Speed, or the Trump administration’s attempts to accelerate the development and production of vaccines and treatments to battle the coronavirus.

“Through Operation Warp Speed, we are assembling a portfolio of vaccines to increase the odds that the American people will have at least one safe, effective vaccine as soon as the end of this year,” Azar said in a statement. “Depending on success in clinical trials, today’s agreement will enable the delivery of approximately 100 million doses of a vaccine being developed by Pfizer and BioNTech.”

While the process to generate a new vaccine is likely to take some time, rather than pin their hopes on one particular company, investors can bet on a broad swath of biotech companies using ETFs.

Some of the most popular ETFs to consider, or ones with significant allocations of Moderna, include the iShares NASDAQ Biotechnology ETF (IBB), the SPDR S&P Biotech ETF (XBI) and the VanEck Vectors Biotech ETF (BBH), and Loncar Cancer Immunotherapy ETF (CNCR).