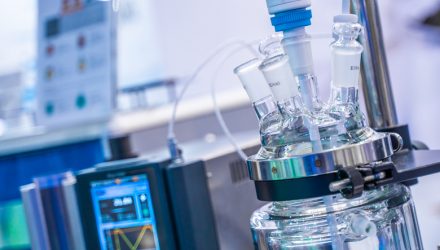 Biotechnology sector ETFs weakened Wednesday as the Trump administration pushes forward plans to allow the importation of cheaper drugs in an attempt to create greater competition in response to the rising costs of U.S. drugs.

The Food and Drug Administration is expected to announce a new rule that allows states to import certain prescription drugs from Canada, the Wall Street Journal reports. A dozen states have already asked for permission to import drugs that meet U.S. quality standards.

Furthermore, the Department of Health and Human Services was set to release a draft guidance that would enable certain medications made and sold in other countries to be imported as well. The imported drugs would have to be tested and be labeled safe for sale in the U.S. The drugs would also need to acquire FDA approval.

The administration has made it a key point to open U.S. markets to imported drugs as federal officials argued it would allow Americans to acquire drugs at the same cost as consumers in other countries.

However, industry groups warned that the plans could threaten patient safety with the introduction of substandard or counterfeit drugs.

“Patients deserve access to the medicines they need with out-of-pocket costs they can afford,” said Jim Greenwood, chief executive of the Biotechnology Innovation Organization, told the WSJ. “Under no circumstance should we risk patient safety to achieve this goal, yet that’s exactly what this dangerous importation scheme will do.”

Drug prices remain far lower in many foreign countries compared to the U.S. For instance, Canada regulates prices of many of its drugs, which puts them at a relatively cheaper price tag. In Europe, governments directly or indirectly control costs through a negotiating process. In comparison, U.S. prices are set by the open market or through less rigorous negotiation by insurers and some hospitals.

“People suffering from unconscionable drug prices are looking for relief, and for some people, with adequate safeguards, that may be found in the somewhat lower prices across the border,” Peter Maybarduk of the consumer group Public Citizen, told the WSJ.