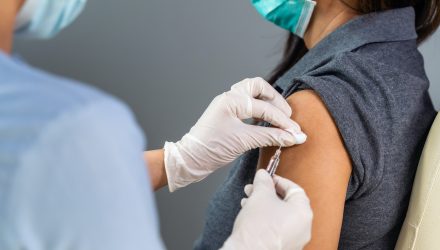 There could be big gains ahead for biotech ETFs, as the Food and Drug Administration on Monday fully approved the Pfizer and BioNTech coronavirus vaccine, making it the first vaccine in the U.S. to be awarded such a designation. The move could generate additional confidence for more businesses, schools, and universities to embrace the current vaccine mandates.

The FDA first granted Emergency Use Authorization for the injection back in December. Amid the drive to get America vaccinated, over 204 million of the Pfizer shots have been given, based on data gathered by the Centers for Disease Control and Prevention.

As a result, Federal health officials had been scrambling to get approval for the vaccine, as they found themselves embroiled in dissension from the scientific community and advocacy groups to fully approve Pfizer and BioNTech’s vaccine ever since the drugmakers first presented their application to the FDA in early May. The companies entered a Biologics License Application, which grants full approval, to the FDA on May 7 for patients age 16 and up.

The decision arrives at a critical time, as the number of coronavirus infections has been ramping up across the nation.

“We’re in the middle of the summer, people are gathering again with people, they’re in large groups, the vaccine has given a false sense of security in some ways to people, and they forget,” Dr. Perry Halkitis, dean of the Rutgers School of Public Health, told CNBC in an interview.

Mississippi Gov. Tate Reeves, a Republican, urged residents of his state to get vaccinated as well, as he struggles to arm medical personnel in the battle, requesting ventilators from the Strategic National Stockpile as the rapidly disseminating delta variant jammed up 55% of ICU beds in the state with mostly unvaccinated patients.

“When you look across the country, to a certain extent, this current wave is the pandemic of the unvaccinated,” Reeves said at a press conference. “We continue to see more and more data, and the data is becoming more and more clear. Those who received the vaccine are significantly less likely to contract the virus.”

Meanwhile, other states like Hawaii, which has a more modest outbreak in comparison to the mainland, still recorded a record number of new cases since mid-July, hitting a seven-day average of 671 new cases per day on Sunday, according to John Hopkins data.

“We are on fire. When we have hospitals that are really worried about being able to take care of people, that’s a crisis,” Hawaii’s health director, Dr. Elizabeth Char, said at a press conference last week. “When we see this exponential growth in the amount of people that are getting infected with Covid-19 every day — 2,000 people in the last three days — that’s a crisis. And at the point at which we overwhelm our resources, that’s a disaster.”

FDA scientists evaluated “hundreds of thousands of pages” of vaccine data from 40,000 trial participants, according to the U.S. agency. The vaccine was found to be 91% effective in preventing the coronavirus, a marginal decrease from the 95% efficacy rate trial data that was touted when the shot was authorized late last year, prior to the emergence of the more transmissible delta variant.

Pfizer’s vaccine achieved the agency’s “high standards for safety, effectiveness, and manufacturing quality,” acting FDA Commissioner Janet Woodcock said in a statement. “While millions of people have already safely received COVID-19 vaccines, we recognize that for some, the FDA approval of a vaccine may now instill additional confidence to get vaccinated.”

For investors, the vaccine approval could be especially significant for biotech ETFs as well.

The Defiance Nasdaq Junior Biotechnology ETF (IBBJ) is up over 4% on Monday, for example.

Finally, the Invesco Dynamic Biotechnology & Genome ETF (PBE) is another ETF that is over 2% higher on Monday.

PBE is part of the suite of Dynamic ETFs from PowerShares, using quant-based screening to identify component companies that may be poised for outperformance relative to a broad-based universe. It is a bit more expensive, however.

For investors looking to trade biotech stocks using ETFs, there is some support from analysts as well.

Despite its effectiveness, there is some hesitation in embracing the vaccine. Although over 60% of the total U.S. population has had at least one dose of a Covid vaccine, a significant number of Americans have expressed concerns about getting vaccinated, even as the highly contagious delta variant spreads. Full approval may assuage some of those worries, as a survey from the Kaiser Family Foundation found 3 in 10 unvaccinated adults said they would be more likely to get vaccinated if one of the vaccines receives full approval.

Full approval is “more psychological than anything else,” said Dr. Paul Offit, a voting member of the agency’s Vaccines and Related Biological Products Advisory Committee. “I mean you already have more than 320 million doses administered that are out there. The vaccines already have an enormous safety and efficacy profile.”

But complete U.S. approval could also convince corporations to get on board. Massive companies like Walt Disney and Walmart have already required that some or all of their employees be fully vaccinated against the coronavirus this fall. Legally, businesses have expressed worries about pushing the vaccine agenda, but full approval could mitigate some of those concerns.

The Pentagon said it would make vaccinations mandatory for service members “no later” than the middle of September, or sooner if the FDA grants full approval earlier.

“You’re going to see the empowerment of local enterprises, giving mandates that could be colleges, universities, places of business, a whole variety and I strongly support that,” White House chief medical officer Dr. Anthony Fauci said Aug 8, when asked about full approval of the vaccines. “The time has come. … We’ve got to go the extra step to get people vaccinated.”

While the vaccine has been approved for ages 16 and older, it is still under emergency use authorization for children 12 to 15 as the company continues to collect data. Dr. Peter Marks, the FDA’s top vaccine regulator, said Monday the agency would move as “swiftly” as possible on approving the shot for children under 12 once the company submits the data.

“Currently, there are still trials ongoing and so the agency has to wait for the company to submit the data for those trials,” he said during a briefing. “We certainly want to make sure that we get it right.”

Before granting full approval, FDA scientists must scrutinize a companies’ clinical trial data, rooting out any discrepancies or safety concerns, said Offit, who is also director of the Vaccine Education Center at the Children’s Hospital of Philadelphia.

“The FDA will do what it thinks it needs to do to make sure that the American public is safe,” he said.

Full approval has benefits beyond emergency use as we well, according to former FDA Commissioner Dr. Robert Califf.

Pfizer and BioNTech are now able to market the shots directly to U.S. consumers. Companies can’t promote their products under emergency use, he said. It also allows the shot to stay on the market once the pandemic is over and the U.S. is no longer considered in an “emergency.”

“The vaccines will still have to be administered under the supervision of a professional who’s qualified,” Califf said. “It’s not like they can send the vaccines to people’s homes. However, they can advertise on TV and promote their products under the watchful eye of the FDA.”

Pfizer and BioNTech have said they expect to generate billions from the vaccine. Under full approval, the companies could also decide to charge more for the vaccines, health experts say.

Meanwhile, Pfizer and BioNTech are also set to request that the FDA approve a third dose as a booster shot following full approval. Last week, the Biden administration said it was preparing to offer booster shots to all eligible Americans beginning the week of Sept. 20.

“We know what the tools are, and now this comes down to policy and political decisionmakers’ value judgment to determine which tools they want to implement,” Dr. Isaac Bogoch, an infectious disease expert at University of Toronto, said recently.