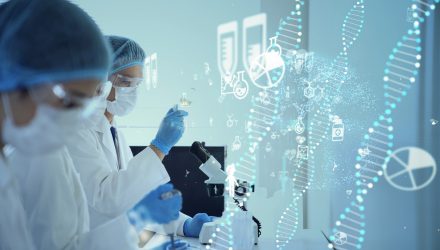 Global Blood Therapeutics, a drug developer with a focus on sickle cell diseases, climbed Thursday after Bloomberg reported that the company attracted bids for a takeover.

Many larger biotechnology and pharmaceutical companies have targeted smaller drug developers as patents on traditional blockbuster drugs have begun to expire. Consequently, many big drugmakers that are sitting on cash stores are beginning to target smaller developers, especially after the recent sell-off that has dealt a severe blow to the biotechnology equity segment and brought down valuations.

Lastly, the SPDR S&P Biotech ETF, one of the largest biotechnology ETFs by assets, uses an equal-weight methodology, which means it tilts toward smaller companies, but not at the expense of exposure to some of the industry’s larger players.