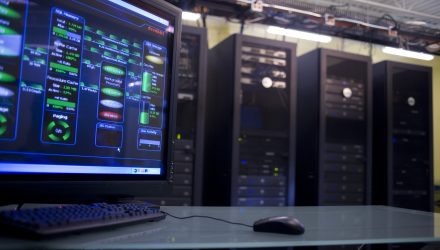 Recently, investors rotated out of the technology sector into perceived value plays, such as financial services and industrial. The good news for tech investors is that damage incurred by well-known exchange traded funds, including the Technology Select Sector SPDR Fund (NYSEArca: XLK), was brief and has been erased.

XLK, the largest technology ETF by asset, is up more than 2% over the past week and some technical analysts believe the benchmark tech ETF is on the cusp of a major upside breakout.

“Tech stocks have bounced back in the past week, rallying 2 percent to return to November highs. But despite the tech sector rally, Miller Tabak technician Matt Maley does see one troubling trend emerging in the space, thanks to the recent underperformance of chip stocks,” reports CNBC.

Of concern for the technology sector, the largest sector weight in the S&P 500, is that semiconductor stocks continue lagging the broader sector. For example, the iShares PHLX Semiconductor ETF (NasdaqGM: SOXX) is still trailing XLK over the past few weeks.

“But despite the tech sector rally, Maley does see one troubling trend emerging in the space, thanks to the recent underperformance of chip stocks. The semiconductor ETF (SOXX) has actually fallen 5 percent in the past month while the XLK has bounced back, a trend that concerns Maley, as many of the chip stocks in the SOXX are also among the biggest holdings in XLK,” according to CNBC.