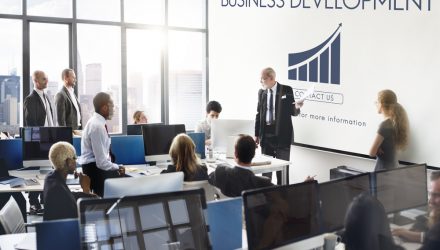 Big Financial Players Finally Give in to ETF Pressure

The exchange traded fund industry has grown to $4.7 trillion in assets in three decades, and some of the more staunch holdouts are finally beginning to give way after years of watching on the sidelines.

“If you are not in the ETF business, you’re facing irrelevance,” Linda Zhang, CEO of Purview Investments, told Bloomberg.

“These long holdouts recognize that if they’re not in the industry and give their investors a choice, they’re going to be at a disadvantage,” Reggie Browne, principal at GTS Mischler, told Bloomberg. “You’re going to hear more people like Wells Fargo jump in over the next 12 months.”

More Wall Street money managers are eyeing the ETF space as mutual funds continue to bleed assets. For example, U.S. mutual funds suffered $278 billion in net outflows over the first half of the year, along with the first-ever drawdown for index-tracking products in a semi-annual period. On the other hand, U.S.-listed ETFs enjoyed inflows this year and hit a new record last week.

The new ETF players are being swayed by client demand for more efficient investment vehicles or greater options. Gerard O’Reilly, co-chief executive officer at DFA, said the financial professionals it works with want ETFs as an investment option. Stephanie Pierce, CEO of BNY Mellon Investment Management’s ETF and index business, also pointed out that ETFs were becoming the vehicle of choice among clients.

“Final approval of these ANTs is a huge driving factor,” Bloomberg Intelligence analyst James Seyffart said. “They probably would have gone into ETFs in the next few years, but with the ANTs, they’re like, ‘This is what we’re going to cling to, this is what we want.’”