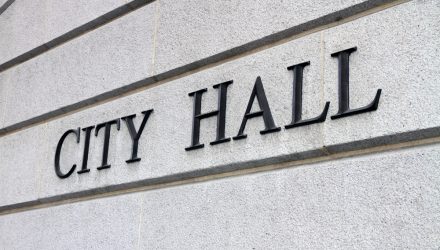 Fixed income investors willing to step out farther on the yield curve can achieve higher-yielding benefits with assets like the VanEck Vectors Long Muni ETF (MLN).

“This fund tracks an index of municipal bonds, a slice of the bond market that is highly coveted due to its tax features,” an ETF Database analysis explained. “These bonds are generally free from federal taxes and in some cases, state and local income taxes as well making these funds crucial components of portfolios for those in high tax brackets.”

Furthermore, municipal bonds are typically used to fund projects that involve infrastructure improvements at the state-wide or city-wide levels. Being that local governments are less likely to default on their debt, the muni debt market is relatively more stable.

As mentioned, MLN specifically targets the long end of the yield curve. In this case, it’s debt that’s 17 years in maturity or more.

While this means taking on more duration risk, the yield potential is higher.

“The fund still has impressive levels of diversification– holding over 150 securities– and a below average expense ratio, making it a quality choice for a building block of portfolios, especially for those seeking to keep costs down but are unwilling to look at total market funds or those that target the short or intermediate sections of the curve,” the ETF Database analysis added.

The demand for municipal bonds has been readily apparent. State and city governments around the country have been eager to quench that thirst for munis with their respective bond offerings.

“U.S. states and cities are turning to the municipal-bond market to raise money for new projects at the fastest pace in at least a decade, a sign of optimism as tax revenue improves with the reviving economy and as federal aid pours in,” a Bloomberg report noted.

“Localities issued about $65 billion in long-term municipal debt in the first four months of 2021 solely for new projects, a 31% jump from the same period of last year, according to data compiled by Bloomberg,” the report added further. “The tally marks the most bond sales for new endeavors, known as new-money issuance, to begin a year since 2010.”