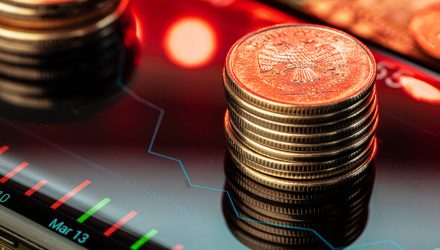 Investors in Russia ETF Should Press Bank to Drop Fees

Russia’s war with Ukraine labors on, and perhaps to the surprise of some investors, Russian financial markets are somewhat functional.

On a related note, the VanEck Russia ETF (RSX), the largest exchange traded fund tracking Russian equities, remains operational. To be clear, however, RSX’s listing exchange stopped trading in the ETF soon after the war in Ukraine broke out, but a net asset value (NAV) is still published daily.

RSX’s NAV isn’t a pretty picture – it’s off 95% since Russia started the war. That’s not the only issue confounding RSX investors. As issuer VanEck points out, depositary fees charged by banks Citibank, JP Morgan, and Bank of New York are further pressuring what’s left of the ETF’s assets.

In a recent note, VanEck advises holders of RSX to contact those banks and request that those onerous fees be waived. Unfortunately, there are two avenues in which depositary banks can levy high fees against depositary receipt holders such as RSX.

“First, the banks have the ability to charge depository receipt holders annual fees for maintaining the depository receipt,” notes VanEck. “These banks have not communicated whether they will charge or waive these fees, but some have already been charged. Based on RSX’s current net asset value, these fees comprise a large percentage of the assets of the fund. The fees banks charge receipt holders are not linked to the value of the receipts.”

Making matters worse, banks can also charge conversion fees, which are applicable when a depositary receipt is converted to the underlying stock.

“VTB Bank and Sberbank conversions were $2.2 million, and an expected Gazprom conversion is anticipated to be about $1.1 million. The total fees to be paid by RSX will be higher if more depository receipts are converted, and the depository banks do not waive their fees,” according to VanEck.

That’s meaningful because, prior to the war, those three stocks were among RSX’s marquee holdings, meaning investors were hit with burdensome fees as the fund liquidated positions in those names. Said another way, RSX is being hurt by the banks’ fees and, in turn, that’s punishing investors in the fund. As such, VanEck is pushing the depositary banks to scrap the fees. It remains to be seen if the banks are open to playing ball.

“Receipt holders like RSX are not getting the benefits, like liquidity, that they are paying for. Moreover, many companies have voluntarily incurred billions of dollars of losses from ceasing business in Russia. We have also implemented a voluntary waiver of RSX’s management fee. We are asking the banks to be reasonable with their depository receipt fees as well,” concludes RSX’s issuer.