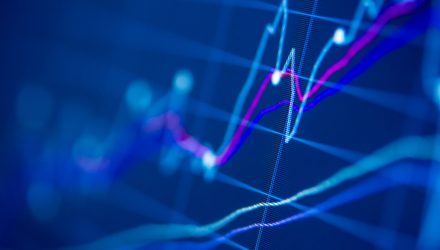 Yields are low across the fixed income spectrum and municipal bonds aren’t being spared. The positive is that bond prices are appreciating, but when yields get too low, investors are often compelled to embrace riskier fixed income assets.

Investors looking for high yields with some protection and tax benefits in the municipal bond universe have a friend in the VanEck Vectors High Yield Muni ETF (HYD). HYD, which tracks the Bloomberg Barclays Municipal Custom High Yield Composite Index, sports a 30-day SEC yield of 2.17%. That’s not the high yield investors are accustomed to with junk-rated corporates, but it’s well in excess of standard muni benchmarks.

“Lower-rated munis have been on a tear this year relative to their higher-rated counterparts. Over the past 52 weeks, the BBB rated portion of the muni market has outperformed the AAA rated portion by roughly 7.5%, based on the Bloomberg Barclays Municipal Bond Index. Although the outperformance gap has narrowed a bit recently, this is still near a decade-long peak for BBB rated issuers,” writes Charles Schwab’s Cooper Howard.

The combination of a rebounding U.S. economy and financial support from Uncle Sam is bolstering the case of non-investment grade munis, including HYD components.

“Recently, Moody’s Investors Service revised its sector outlooks to either ‘positive’ or ‘stable’ for all sectors other than the not-for-profit health-care sector. In addition, it recently raised its rating for the state of Illinois, which is the lowest-rated state and often used as example of risk in the muni market. This was the state’s first rating upgrade by Moody’s in nearly two decades,” according to Howard.

HYD holds 2,022 bonds and Illinois is its second-largest state weight at 11.7%, according to VanEck data. New Jersey is the fourth-largest state allocation in the fund at a weight of 7.9%. Illinois and the Garden State combine for about 42% of the BBB and below muni landscape.

Integral to the municipal bond investment thesis is the ability of states and municipalities to collect tax revenue. Today, 20 states have fully recovered from the coronavirus pandemic in terms of tax collection. That group includes California and Illinois, which combine for over a quarter of HYD’s weight. About 53% of HYD’s holdings are rated somewhere in the B spectrum.

“Over the past 52 weeks, the BBB rated portion of the muni market has outperformed the AAA rated portion by roughly 7.5%, based on the Bloomberg Barclays Municipal Bond Index. Although the outperformance gap has narrowed a bit recently, this is still near a decade-long peak for BBB rated issuers,” adds Schwab’s Howard.