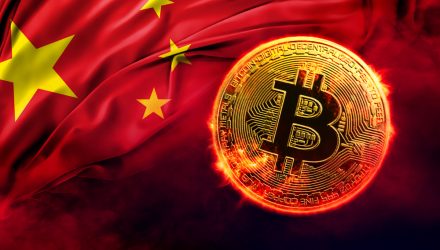 China’s Crackdown on Bitcoin Miners Could Be Huge for DAPP

Until recently, more than half the world’s Bitcoin miners were located China, but Beijing has clamped down on that activity, sending dozens of miners of largest digital currency offline.

While some may seek refuge in other locations, including the U.S., China’s Bitcoin crackdown is sending miners scurrying. The new policy, much of it rooted in climate change policy, at least according to Beijing, is dramatically altering the Bitcoin landscape. According to prior estimates, 65% to 75% of global Bitcoin mining occurred in China.

The new mining order could be a boon for the VanEck Vectors Digital Transformation ETF (DAPP). DAPP is a new exchange traded fund, having debuted in April, and as one of a small number of ETFs with noteworthy exposure to publicly traded Bitcoin miners, it’s ideally positioned to benefit from China’s harsh stance on crypto mining.

“The world has known for months that more than half the world’s bitcoin miners would be going dark as China cracked down on mining. Now that it’s happened, the bitcoin algorithm has adjusted accordingly to make sure miner productivity doesn’t continue to fall off a cliff,” reports MacKenzie Sigalos for CNBC. “That adjustment – which took effect early Saturday morning – also means that way more cash is going to the bitcoin miners who remain online.”

DAPP Could Be in Demand

One way of looking at China’s impact on the Bitcoin mining universe is that due to the crackdown, it’s now suddenly more efficient and profitable to mine for the cryptocurrency. That’s the result of so many Chinese miners going dark.

“More than 50% of the hashrate – the collective computing power of miners worldwide – has dropped off the network since its market peak in May,” according to CNBC.

In other words, for the first time in the 12 years or so Bitcoin has been on the market, mining has capacity has been dramatically slashed due to governmental interference. With competitors sidelined, even if just temporarily, DAPP components like Microstrategy (MSTR), Marathon Digital Holdings (MARA), and Riot Blockchain (RIOT) will look to benefit. Those stocks combine for almost 17% of DAPP’s weight.

DAPP, may already be responding to events in China. The VanEck ETF jumped 5.43% last week.