You are at:Home»Alternative ETFs»Best ETFs to Hedge Further Weakness in China 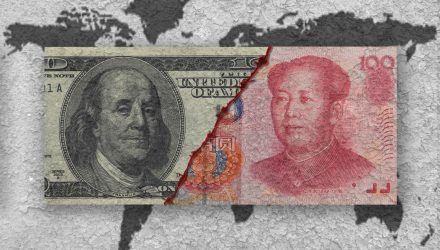 The escalating trade-war rhetoric is dragging on Chinese markets. Investors who believe the increasing tariffs will weigh on further growth in China’s economy can look to a number of bearish exchange traded fund plays to capitalize on this emerging country’s misfortunes.

The iShares China Large-Cap ETF (NYSEArca: FXI), the largest China-related ETF, continued to decline 2.0% Thursday after falling off 7.9% over the past three months.

“Global stocks were pressurized by the Asian markets, as most indices were down more than 1 per cent due to worries about the trade war and the slowdown of China’s economy leading to a possible credit crunch, as evidenced by recent data,” Louis Wong, dealings director at Philip Securities Hong Kong, told South China Morning Post. “Yesterday’s rebound was very short-lived, but due to lingering investor concerns over the trade war, I see no sustainable rebound in the short term.”

Pressuring Chinese markets, China’s yuan currency has depreciated against the U.S. dollar for a sixth consecutive session Thursday, to 6.5088 yuan per dollar, or close to this year’s low of 6.5449 in early January.

“The worry of a trade war is to blame for the drop of the yuan. The US has threatened to impose the tariffs on Chinese exports, which has led to worries about the outlook of the yuan,” Ben Kwong Man-bun, director of KGI Asia, told the SCMP.