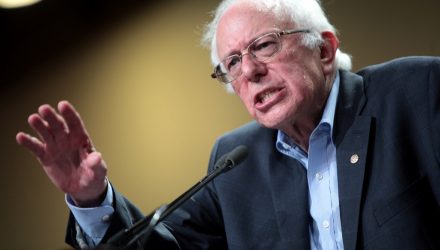 Former presidential candidate Senator Bernie Sanders introduced a bill on Wednesday that called for the dismantling of any financial company with a total exposure of greater than 3% of the gross domestic product, which would equate to $584 billion. Based on these numbers, this would mean financial titans, such as JP Morgan, Wells Fargo and Bank of America.

Sanders’ bill comes on the heels of a historic bull run in the economy, but with the growth of companies like Apple and Amazon reaching the $1 trillion level, echoes of the financial crisis in 2009 can be heard. If the bill was present over 10 years ago, it may have saved companies like Lehman Brothers from collapse.

The bill, co-sponsored in the House by California Democrat Rep. Brad Sherman, also comes after the U.S. government injected $700 billion into the capital markets to purchase distressed assets from banks a decade ago. With the markets growing at historical levels, the “too big to fail” statement that floated around in 2009 is obviously addressed in Sanders’ latest bill.

Sanders’ bill comes over a week after J.P. Morgan Chase CEO Jamie Dimon reaffirmed the forward momentum of the current bull market as he cited that the economy will sustain its fortuitous path of growth without any obstructions ahead. Dimon’s comments came ahead of the Federal Reserve raising the federal funds rate last week by 25 basis points.

Since  the installment of U.S. President Donald Trump’s administration, the country’s gross domestic product has grown by an average of 2.7%  per quarter. Furthermore, third quarter growth is forecasted to come in around 3.3%.