You are at:Home»Featured»Banking ETFs Fall on New Credit Suisse Forecasts 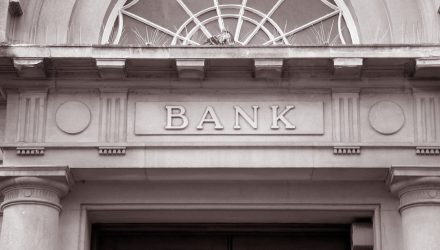 The banking sector and bank ETFs could be in trouble, according to Credit Suisse and Nomura, who admonished investors Monday of “significant” damage to Q1 results, after they began exiting positions with a massive U.S. hedge fund that defaulted on margin calls last week.

While neither bank explicitly named the fund, it’s been reported that Archegos Capital Management is the firm connected to the fire sale.

Credit Suisse shares tumbled 13% as the bank said in a statement that a “significant US-based hedge fund” failed to meet its margin commitments. It said the default affected “certain other banks” as well, though did not say who they were.

“Following the failure of the fund to meet these margin commitments, Credit Suisse and a number of other banks are in the process of exiting these positions,” Credit Suisse said.

“While at this time it is premature to quantify the exact size of the loss resulting from this exit, it could be highly significant and material to our first quarter results, notwithstanding the positive trends announced in our trading statement earlier this month,” the bank added.

The news has peaked the interest of regulators, who are now observing the situation.

“We have been monitoring the situation and communicating with market participants since last week,” said a spokesperson for the Securities and Exchange Commission.

Bank stocks weighed on the index futures and ETFs, with Goldman Sachs down more than 3% and JPMorgan Chase off 1.4%. Meanwhile, bond yields are climbing again, after a break from the recent spike higher.

Nomura fell 16% after it also issued a trading update on Monday stating that a “significant loss” at one of its U.S. subsidiaries resulting from transactions with a client stateside is affecting the financial sector. Japan’s largest investment bank said it was scrutinizing the potential damage caused by the loss, estimated at $2 billion.

“This estimate is subject to change depending on unwinding of the transactions and fluctuations in market prices,” the bank said.

“Nomura will continue to take the appropriate steps to address this issue and make a further disclosure once the impact of the potential loss has been determined.”

Johann Scholtz, equity analyst at Morningstar, told CNBC on Monday there could be more exposure to Archegos in the banking space.

“But I think the question is really to what extent the banks have hedged out their risks, and it seems that Nomura and Credit Suisse’s risk management was maybe not as stringent as it might have been, or should have been, which I think explains the large moves in their share prices this morning,” he added.

It’s been a rough road for Credit Suisse for some time now, and Bank of America on Monday downgraded the bank’s stock to neutral and slashed its 2021 profit and buyback forecasts by 500 million Swiss francs ($533 million). The Bank of America analysts suggested this latest setback could be “one too many issue for the company to look through in the normal course of business.”