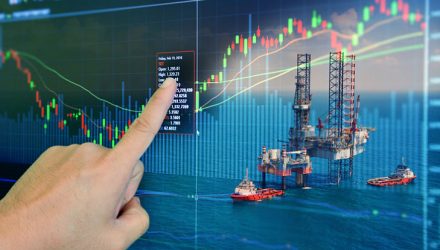 The Energy Select Sector SPDR (NYSEArca: XLE), the largest exchange traded fund dedicated to energy equities, is down nearly 14%. That is just one example illustrating the struggles of energy equities at the hands of slumping oil prices.

XLE and rival ETFs, such as the Fidelity MSCI Energy Index ETF (NYSEArca: FENY) and the Vanguard Energy ETF (NYSEArca: VDE), are weighted by market value, meaning as the sector slides, particularly its largest members, these ETFs are vulnerable. The S&P 500 is also weighted by market capitalization, highlighting the energy sector’s waning influence on the benchmark U.S. equity index.

“As the price of crude approaches bear market territory, it’s dragging down energy stocks in the S&P 500 Index. The industry is the biggest decliner in the gauge Tuesday, falling 1.4 percent. But its ability to push around the broader index has been limited, thanks in part to a loss of $205 billion in market value this year. Earlier this month, energy’s weight in the S&P 500 fell below 6 percent, the least influence it’s had since 2004,” reports Dani Burger for Bloomberg.

As of Tuesday’s close energy was the S&P 500’s seventh-largest sector allocation, a spot the group has occupied for some time. However, at 6%, energy is more than 50% the 9.2% allocated to consumer staples. Three sectors – healthcare, financial services and consumer discretionary – have more than double the weights in the S&P 500 than energy does while technology’s weight in the index is more than triple that of energy’s.