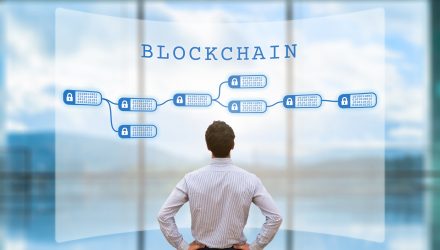 As Bitcoin Recovers, Another Blockchain ETF is in the Works

Assuming the new blockchain ETF comes to market, it will trade on the Nasdaq. The First Trust Indxx Blockchain ETF will also exclude companies with market values of less than $200 million and those with average daily dollar volume of less than $1 million. The ETF could include stocks from the financial services, industrial and technology sectors.

“Blockchain technology is an entirely new and relatively untested technology which operates as a distributed ledger. The risks associated with blockchain technology may not emerge until the technology is widely used. Blockchain systems could be vulnerable to fraud, particularly if a significant minority of participants colluded to defraud the rest. Access to a given blockchain requires an individualized key, which, if compromised, could result in loss due to theft, destruction or inaccessibility,” according to First Trust’s SEC filing.

Cryptocurrency market capitalization has grown in recent years to $172 billion, with bitcoin representing more than 54 percent of that total, or $94 billion. The bitcoin spot market has also grown to trade roughly $1.5 billion in notional value each day.