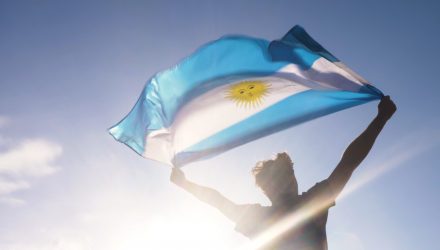 Argentina country-specific ETFs climbed Tuesday after the Argentinian central bank moved to shore up its currency, lifting the peso to its biggest gain in six weeks.

On Tuesday, the Global X MSCI Argentina ETF (NYSEArca: ARGT) increased 4.6% and the iShares MSCI Argentina and Global Exposure ETF (BATS: AGT) rose 3.0%. The Argentina markets have been experiencing an awful year, with ARGT down 24.8% and AGT 24.7% lower year-to-date.

Argentina’s central bank moved to diminish the number of pesos circulating in the economy by raising reserve requirements for banks, a measure that will sop up 60 billion pesos, or $2.1 billion, in liquidity, Bloomberg reports.

Policy makers also hiked rates on local central bank notes, or also known as Lebacs, due over the next few months to pay yields as high as 52%.

The U.S. dollar depreciated 0.7% against the Argentina peso to ARS$28.094 Tuesday. The peso has depreciated 34% this year for the worst performance among emerging market currencies.