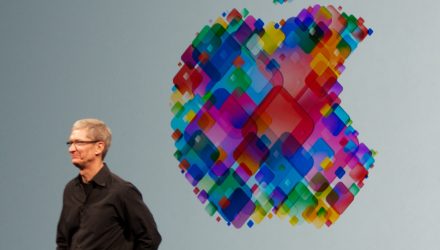 Although Apple’s third-quarter is often viewed as the company’s most “boring” season, the tech giant beat earnings estimates on Wednesday and saw its shares jump nearly 3 percent, reaching a session high of $207.05 and making the iPhone maker the winner in the race to one trillion. Year-to-date, Apple stock price has surged over 20 percent.

Investors have long believed that the iPhone maker would be the first to break the $1 trillion record, as the company has sat over a $900 billion market cap since November. Other tech giants were also in the race, including Amazon and Google-parent Alphabet, which have $874.2B and $850.2B valuations at the time of writing, respectively.

Like many companies, the $1 trillion company had very humble beginnings. Founded in a garage in 1976, Apple was the tech start-up idea of three friends: Steve Jobs, Steve Wozniak, and Ronald Wayne. Apple’s first product, the Apple Computer I, was widely considered “a beautiful work of art” by fellow hobbyists, as it integrated state-of-the-art parts in an innovative form factor. With fewer than 70 units believed to exist today, the remaining computers now auction for upwards of $300,000.

Within the next decade, Apple established itself as a leading innovator within the tech industry, creating breakthrough products like the iPod, iPhone, and iPad. The company quickly evolved into a global player, attracting customers from around the world. In February, Apple announced that it reached a base of over 1.3 billion active devices globally. Now, as a trillion-dollar company, it’s still business as usual for Apple, as it continues to be a force to be reckoned with.