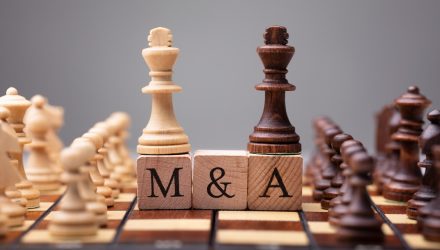 An ETF To Invest In Mergers, Acquisitions, And Arbitrage

For investors looking to diversify a portfolio with a fund that is not highly correlated with stocks or bonds, the IQ ARB Merger Arbitrage ETF (MNA) may be the elusive component they desire. MNA is an ETF that offers an opportunity to engage with the M&A universe in a more structured manner.

According to the data sheet: The IQ Merger Arbitrage ETF seeks to track, before fees and expenses, the performance of the IQ Merger Arbitrage Index. The Index seeks to achieve capital appreciation by investing in global companies for which there has been a public announcement of a takeover by an acquirer. This differentiated approach is based on a passive strategy of owning certain announced takeover targets with the goal of generating returns that are representative of global merger arbitrage activity. The Index also includes short exposure to global equities as a partial equity market hedge. Merger arbitrage is a directional hedge fund strategy. The IQ Merger Arbitrage ETF is not a hedge fund and does not invest in hedge funds.

Saul Bruno, chief investment officer at IndexIQ and managing director at New York Life Investments said on CNBC, “So MNA is a passive ETF. So we run a systematic or a rules-based process to try to capture as many merger-arb deals as we can, with the general idea being the more deals you have, and with the premium and completion rates, you have the opportunity to pick up some of those premiums, and deliver valuable returns to the portfolio.”

Bruno added, “So being that it’s a systematic process, we expect to have fairly high completion rates. And that’s what we’re trying to capture here. So if you look at the completion rates, it has actually improved over the last 3 years with this administration. So cancellation rate has actually gone down. It’s somewhere probably around 85-90% of the deals are successfully capturing or successfully closing. Essentially what we are trying to capture there is the premium associated with those deals. By owning approximately 40-50 names at any point in time , we are trying to diversify some of that specific risk of one particular deal breaking. But we are really trying to capture the overall premium associated with merger-arbitrage investing.”

One unique aspect of MNA is that it is the type of ETF that investors can hide out in when the market panic sells like it has this past month, with the ongoing trade war jitters, and the general environment of global economic uncertainty, gaining diversification and protection. MNA also fits well into most portfolios because of the low correlation it has to stocks and bonds.

“For an individual investor it would probably be difficult to own 40-50 deals and then to identify the hedges and to put those on. Clearly doing it in a structure like an ETF gives you that diversification. But then also you look at the additional benefits of the ETF relative to other structure, say a mutual fund or a limited partnership type, MNA has all the benefits of a traditional ETF including transparency, liquidity, and tax efficiency, so that’s why we think it’s the preferred vehicle for a strategy like this.”