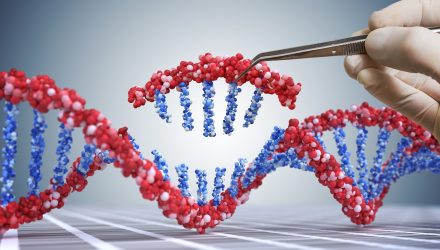 An ETF to Capture Biotech’s Breakthrough of the Century

Health care investors should look to biotechnology sector-related ETFs that tap into some exciting new technologies that could translate into growth potential, such as CRISPR, biotech’s breakthrough of the century.

On the recent webcast (available On Demand for CE Credit), The Power of Genome Editing: What Investors Should Know, Manisha Samy, Analyst Genomic Revolution at ARK Invest, illustrated innovative developments that could prove to be attractive investment opportunities. Specifically, she looked at CRISPR, which could enable cheap and rapid “write” capabilities to correct genetic defects.

“Gene-editing expands and accelerates the universe of genomic medicines. ARK believes that CRISPR is a genome-editing platform that will address the world’s most salient health issues. It is a ‘molecular swiss army knife’ with a rapidly expanding number of tools that perform different functions,” Samy said.

Looking ahead, ARK expects CRISPR-based innovations to accelerate given the technology’s ease of use, cost-efficacy, growing body of research surrounding its safety and AI-powered CRISPR nuclease selection tools. For example, Samy argued that CRISPR could become a major factor in the $75 billion annual addressable monogenic disease market where there are 10,000 identified diseases. However, only 5% of diseases caused by a single gene have any available treatment today. ARK expected CRISPR to enter human trials in 2018.

CRISPR could also be utilized to address some of the most prominent healthcare problems, which opens up a significant investment opportunity in monogenic diseases. For example, diabetes is expected to affect 700 million in the next five years with global healthcare spending up to $1.2 trillion, rheumatoid arthritis is projected to affect 30 million with $30.5 billion in global spending to combat the disease, and HIV is estiamted to affect 40 million with spending at $50 billion.